Wash the blood off my scarf 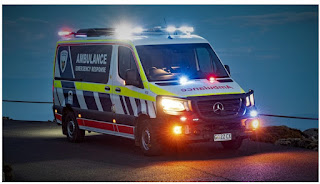 I've been a bit slow to write about this because I didn't want to worry people.  But a lot of you will realize something is up when I do not turn up for church tomorrow.  The fact is that when I left the quiz night on Wednesday I had a bad fall trying to walk up the hill to the car park.  Fortunately one of the other people leaving the venue was a nurse and she gave me first aid while an ambulance was summoned.
After a few hours in the ER at the Royal Hobart Hospital, they patched me up and gave me a bed for the night, letting me go home the next afternoon.
I'm not in any pain, but the left side of my face is like a jigsaw puzzle where they glued me back together. Oh, and I had a spectacular black eye the next day.  I don't think I'll ever forget the moment my head hit the asphalt -- I thought for a second somebody had hit me on the side of the head with a cricket bat.
So if you don't see me around for a week, you'll understand why.
*
Recuperation day 6. Can't remember the last time I spent the day in bed, but as my Quaker friends would say I felt a leading to it.  A selection of snacks on the bedside table, listening to the radio, reading my e-mails, dozing off every now and again.  As necessary go out and visit the bathroom and/or make a hot drink.  My left eye is coming good and I can now look in the mirror and see myself in 3D - not that this is a pleasant view at the moment.  I no longer feel like I am wearing a Phantom-of-the-Opera mask over the left side of my face.

This morning I fed the poultry in my pyjamas.  How they got in there I'll never know!
(You need to be a Marxist to appreciate that joke.)

Tuesday evening I ventured out to the quiz night.  The other members of the team surveyed me thoughtfully and muttered things like "Well, you certainly did a job on yourself."  When the quizmaster read out the scores halfway through, she commented our team might have done better but one of us had suffered a head injury!  There were eight teams and in the end we finished fifth with 78 points;  the winners were the Dawdlers who belied their name by coming home with 84 points.  But we did win a bottle of wine for solving the puzzle question and I got 9/10 for the Art & Literature round.  So not too bad.

I came home and made a cup of Nerada Detox tea. A blend of Dandelion, Lemon Verbena and Milk Thistle with a dash of Senna and Nettle.
*
July 11th I went to the eye clinic for a follow-up exam.  An orbital fracture sounds like something you worry about at NASA but my doctor doesn't seem to be worried about it.  I had lunch in town then went home and took a nap;  I didn't plan it, it just sort of happened.
In the evening, I got a big tray of snacks and drinks and settled down in front of the laptop to watch the first Garrison Keillor show any of us have seen in years.  Thanks to the Mandolin site for streaming it.
*
Temperature in my house in winter seems to sit on 40 F during winter according to my old thermometer, which I think is 4.5 C -- but then I live in Tasmania.
*
Watched two movies on-line.

ANGELS OF TERROR (1971) was the last of the long-running series of Edgar Wallace movies made in Germany.  Karin Dor was no longer starring, but Uschi Glas makes an acceptable substitute.  An Australian woman arrives in London to search for her sister who she finds is involved with a drug ring. The gang itself is under attack from an unknown rival, who is methodically assassinating them one by one.
FOR A GOOD TIME, CALL... (2012) adult comedy about a girl in New York who discovers her room-mate is running a phone-sex business.  After her initial revulsion, she is tempted to take over the business and (as they say in the classics) hilarity ensues.  This is actually quite funny and both Ari Graynor and Lauren Miller Rogen are fun to watch.  An independent movie that had its premiere at the Sundance Film Festival. 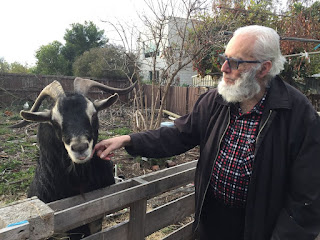 Tuesday 24th May
No quiz for me tonight.  Seventh day of isolation.  Weirdly, the last week has seemed like a never-ending  Saturday afternoon to me.  No beginning or end, just a long middle.  Hard to believe the world is going on as usual outside my front gate.  At least I'm saving a fortune in petrol  -- which reminds me I should st

art the car tomorrow to make sure it hasn't carked it while I've been in quarantine.
*
I don't contribute to many of the on-line fundraisers like Kickstarter and Gofundme, but now and again I do succumb to temptation.   Earlier this year I pledged a few bucks to a project that was bringing back into print new and old stories from August Derleth's famous Sherlock clone Solar Pons.  Today I received via email THE NOVELLAS OF SOLAR PONS and a  handful of new volumes like THE PAPERS OF SOLAR PONS and THE NEW ADVENTURES OF SOLAR PONS  (not forgetting THE NECRONOMICON OF SOLAR PONS !).   Enough e-books to keep  me busy for months to come.       *
Numerology isn't something that usually interests me.  But it's hard not to be startled by this week's quiz night results.  I went to two quiz nights in two days.  Both times we came second in the final results, and both times we won a bottle of wine for solving the puzzle question on the second clue.  Something felt strange about all that.
*
The new survey is out for radio listening in Hobart.  As expected, the two big commercial FM stations are battling for the younger audience, but if you look at the numbers you will notice that the ABC picks up more and more listeners as the ages go up.  By the time we get to the final column (65 and over) the public broadcaster scores an unbeatable 39.5% and only one of the commercial stations scores more than 1% !
*
There are certain landmarks that show the progress of the seasons from summer to winter.  First week you start wearing a jacket outside.  First time you put on a beanie inside and outside.  First time you get out the Ugg Boots (June 3rd this year).  Next will be the first time you go searching for those gloves you wore last winter.
*
June 7th was a Tuesday.  After checking the apparent temperature outside (2.5C)  I was glad I didn't have to be out early.    Dressed warmly before I went out to play croquet  --  the weather forecast made it sound as though I needed to be prepared for rain, snow or hail but actually there was enough sunshine for one game.
And I was happy to be able to buy some Ozempic on the way home, after the pharmacist scrutinised my prescription to make sure I was a diabetic and not some hipster wanting to lose a few pounds before they tried out their new swimwear for next summer.
It is also cheering to get a reminder in the mail for your overdue water bill when you know you paid it last week!

At the quiz night our numbers were down, so the folk at the Minerva's Disciples table adopted Caroline and I.  But even our combined brainpower wasn't enough to defeat the unstoppable Jambag table and we finished second (again).   And the Wednesday night quiz ... second again???
*
Routine visit to my GP.  Signed my form for the Transport Department, gave me my flu shot and asked "Are you still taking the Ozempic injections?"  "When I can get it," I replied.  He gave a wry laugh.
*
The winter weather is setting in.  Last night the wind was gusting and kept blowing my bedroom open.  "How can I keep that closed?" I said to myself.
And a little voice in my head said "Put a box of books against it."
I said "Where can I find a box of books in my house?"
And the little voice laughed and laughed....
*
We didn't do so well in the Wednesday night quiz, coming in fifth out of nine teams.  But I was amused at the puzzle question they gave us tonight.  The question was about a painting, and the first few lines of the clue were a vague description of it, followed by a passing mention that the artist had once been featured in a DOCTOR WHO story.  The result  --  five teams answered correctly after the first clue !  Including us, needless to say.  ☺
*
I knew this would happen one day.  I don't know the technical names, but I've noticed there are two sorts of goats -- ones whose horns grow backwards from their heads and ones whose horns grow sideways.  My goat is the latter, so I'm always careful not to put my head down next to him.  But ... a few minutes ago he was standing at the fence, waiting for his afternoon feed.  As I leaned over to put the hay in his trough, he swung his head sideways and the tip of his horn whacked into my glasses, driving them into my cheek.  Ouch!
What I fear is that it will leave a mark visible beneath my spectacles and if someone asks what happens, I'll have to relate the whole unlikely story.
Come to think of it, I am having trouble typing this.   Could I have concussion??
*
My old laptop has been getting slower and slower - I think I've used it every day since the pandemic began - so I finally got round to setting up the new laptop I bought last year.  It's been sitting in a box in the corner of my room, while I kept thinking "I must get round to that" every few weeks.  One of the first things it did when I got it running was to update itself from Windows 10 to Windows 11.  A bit different to what I'm used to, but I seem to have figured out most things.  I suspect that I am having less trouble than a friend if mine will - he dropped his laptop and broke it, but one of his family has obtained a new laptop and is sending it to him.  The only stumbling block for him may be that his old machine was still running on Windows 7.
*
We have had a few cold days this winter but not as bad as some years.  Usually by the shortest day I am shivering and complaining about the rains, mud and snow.  The other day I went to the Croquet Club and by the time we got into the second game it was bright and sunny, motivating me to discard my scarf and beanie for the rest of the game.
Some years at this time the grass is very thin and anemic, while the lawn we were playing on this week was like a very large piece of green carpet.
*
So true.  "Nothing is as it was."
Linda Mottram on ABC Radio's THIS WEEK June 25th.