.
A Merry Christmas and a Happy New Year to all from Michael (words) and Julie (pictures) 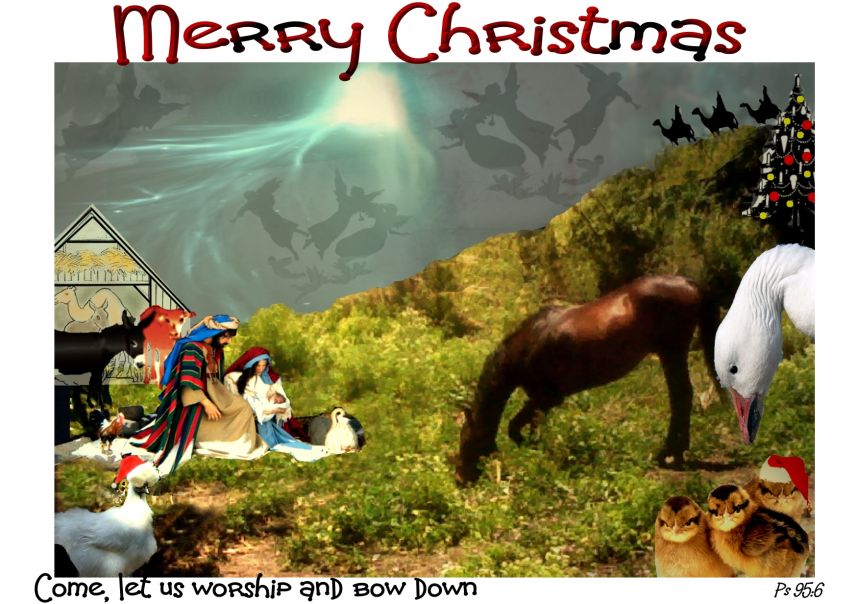 Posted by Mike Hobart at 6:00 pm No comments:

What did you do today?

The other day, I was complaining how busy I was to somebody and they said “So what do you do all day now that you’re retired?”

Let’s take yesterday, which happens to be a Thursday. I had been late getting to sleep the night before, but I had to be up on time to wake my sister Julie and feed the poultry in the backyard. We needed to be at the Croquet Club on time for the Thursday morning golf croquet game.

The game went off well, but we spent so much time gossiping and exchanging Christmas greetings that we didn’t have time for a second game before we had to leave for a lunch date.

Julie’s old school friend (and fourth cousin) Madeleine was in town and had a small window for lunch while her mother was at the hairdresser. We met at the Green Store cafe in New Town and caught up over a meal. She needed a few extra Christmas lights, so we suggested dropping in to Chickenfeed in Moonah.

That didn’t help much, since we discovered the Chickenfeed store had been closed for flood-related reasons since the torrential downpour on Monday. Fortunately the very similar Reject Shop is just across the road.

After Madeleine had hurried off with her purchases, Julie remembered she wanted to drop off a Christmas card at the Croatian restaurant down the street. We wandered in there to find them busily cleaning up and putting everything away, ready to leave for their Christmas holiday. “Come in, come in!” they said cheerily and we ended up sitting in the darkened restaurant with a glass of champagne while we discussed their holiday plans.

We left with a large plate of cakes that they’d cleared out of the display at closing time. “That will do us for dinner,” I observed, hefting the weight of the platter.

The next detour was in to the St Vincent de Paul shop, so Julie could go through the $1 bargain rack and look around for any knickknacks suitable for last minute Christmas presents.

From there we drove to the feed store to pick up some wheat, and then on to Julie’s property to feed her animals. After I had walked the dog, I sat down for a few minutes to wait for Julie and felt very tired. The five hours sleep I had last night seemed to have been not quite enough to recharge my batteries.

We drove back to my house and I checked my e-mails and Facebook page while we had a cup of coffee. I stuck with the decaffeinated sort, since I was planning to take a nap for a while.

Two hours later I got up feeling a little better. I woke Julie, who had followed my example, and put the kettle on again. There was nothing on television we wanted to see, so I pottered about gathering up the week’s garbage, burning some audio files onto CD, and throwing together a makeshift supper. By then, it was time to switch on to listen to the Nightlife programme on ABC radio.

We listened to the late-night quiz segment, then went outside to feed the poultry in my backyard. After that we got back in the car and drove to Julie’s place to repeat the performance with her animals.

I walked the dog again, then shared an apple with her. The ginger cat wandered in and curled up on his blanket. I raised an eyebrow and said “What have you been doing today?” but there was no answer.

After Julie finished feeding the horse and checking on the new batch of ducklings, we went back to my house. I made a cup of tea, then set the computer to record this week’s episode of Those Were The Days for me overnight.

I looked at my watch and found it was very late again. What had I been doing all day? Blessed if I know.
Posted by Mike Hobart at 2:03 pm No comments:

OK, I haven’t been contributing much the last couple of months. This is partly due to the travails of the Australian winter, and partly due to some health problems.
Like a lot of people nowadays, I have type-2 diabetes. For a couple of years I’ve been taking insulin with moderate results. So I was surprised when my doctor told me that he was going to take me off the insulin and put me on something new, something called Byetta.
I was a bit surprised, since I was under the impression that once you went on to insulin you were on it for good. But I was willing to try something different. He gave me a prescription and I left it at the pharmacy to be filled.
While I waited for the Byetta to arrive, I did what you would have done - googled the name to find out what it was and how it worked.
My sister was sitting across from me and looked up when I gurgled. “What’s wrong?” she asked me.

Yes,folks, Byetta is in fact lizard spit! To be fair, it is a synthetic hormone, one that mimics a substance found in the saliva of the Gila Monster.
I had grown up reading Spiderman comics, so I knew what happens to people who inject themselves with lizard essence. I imagined looking at myself in the mirror every morning, waiting for the first scales to appear.
Despite my initial misgivings I started on the new drug and injected myself morning and night for a couple of months. My doctor was pleased with the results -- not only were my blood sugar levels as good or better than on insulin, but I lost nine pounds.
Before you all rush out looking for Byetta in your local drug store, I should say it isn’t available as a diet aid, and it has some unpleasant side-effects. Chief among these is nausea, though this eased off as the weeks went by.
The reason it is associated with weight loss is that at first it kills your appetite stone dead. Because of the effect it has on your digestive system, I always felt as though I’d just eaten. I had no interest in seeking food; if it was put on a plate in front of me at the table I’d eat it. I lost interest in tea and coffee almost completely.
The only things that I actually wanted to consume were water and fruit. I felt as though I was on one of those silly fad diets.
A couple of months have gone by, and things have changed only a little. I’m still eating less (and enjoying it less -- no “comfort eating” for me). I can tolerate a bit of coffee, though I drink almost no tea. In accordance with Murphy’s Laws, it was only a few months ago that I stocked up on my favorite brands of tea, meaning that I probably now have a life-time supply of tea-bags.
I do have a little appetite in the middle of the day, after the morning shot has started to wear off and before I take the evening shot. My between-meals snacking is a thing of the past though.
It will be interesting to see what the long-term results of the change in medication will be. If the weight loss continues, I may be able to get out those trousers that I banished to the back of the wardrobe a few years ago!
We shall see.
Posted by Mike Hobart at 5:04 pm 2 comments:

November is a novel month 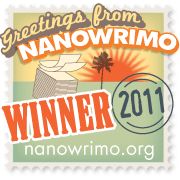 November is always a trying time of year, because it’s National Novel Writing Month (a.k.a. NaNoWriMo). People all over the world set themselves to producing 50,000 words of fiction, starting on November 1st and going through to midnight on the last day of the month. It can be done, but it isn’t easy.
This was the seventh year I’ve taken part, and each year it seems to get a little harder. Last year was especially difficult and I felt a lot of dissatisfaction after cranking out a potboiler titled “The Purple Page.”
This year I was hoping to produce something better. I had spent a lot of time during the year musing on the plot and I felt I had a reasonable plot skeleton worked out.
The title was “The Moonlight Visitors” and would concern a man who discovered that his house guests were actually from a parallel world - that explains the
Tasmanian Tiger he saw in the back garden.
Things would have worked out all right if I’d been able to write every day -- about 1700 words a day is recommended. But things distracted me, and I had three or four days when I didn’t write at all. I was short of sleep, averaging about five and a half hours a night. There are some things that you can still do on four hours sleep, but writing fiction is not one of them.
The end result was that I had half the novel written by the time we were two-thirds of the way through the month. My maths isn’t great, but I knew I was in trouble.
I re-organized my schedule for the last ten days of the month to allow me more time to write. Especially the last three or four days. Who was the author who said the secret of writing was applying the backside to the chair and the fingers to the keys?
A pleasant surprise, I managed to finish at 4:15 pm on the last day of the month. Story completed, and almost eight hours to spare. “Wow!” I thought.
Next year I’ll be better prepared.... But then I say that every year.
Posted by Mike Hobart at 4:55 pm No comments: