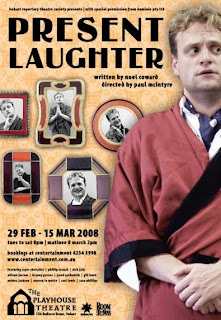 Name a Noel Coward play. Chances are you wouldn't say "Present Laughter" but that was Hobart Rep's opening production for 2008.

First staged in 1942, this comedy has been revived around the world many times with varying degrees of faithfulness. Here we have Nick Falk in the demanding role of theatrical superstar Garry Essendine -- Garry is seldom off-stage and never stops talking when he is on stage. His dialogue is like a Gatling gun, firing witty remarks, sarcasm and barbed comments at maximum speed.

The story takes place in Garry's London flat, where he is plagued by a never-ending series of visitors including his manager, his ex-wife, a star-struck admirer and even (a modern touch) a creepy stalker, all played by veteran members of Hobart Rep.

The Playhouse was full of enthusiastic theatregoers for this farce. It bodes well for Rep's 2008 season, though I notice they're only doing five plays this year. Most years they've been doing six.