One of those things

Very unsettled weather all this week. The equinox doesn't help, and being situated between the warming Australian mainland and the sea ice of Antarctica means the wind is almost intolerable.

To add injury to insult, I cut my foot on some wire while walking across the back yard when I fed the poultry yesterday morning.

The music of Cole Porter may no longer fill huge venues, however a small but enthusiastic audience turned out tonight at the Moonah Arts Center to hear Kaye Payne.

Out of his 800 odd songs, she chose for the evening
Night and Day
Too Darn Hot
So Nice to Come Home To
Love For Sale
Let's Do It
I Get A Kick Out Of You
Everytime We Say Goodbye
Don't Fence Me In
What Is This Thing Called Love
I've Got You Under My Skin
True Love
You Do Something To Me
Just One of Those Things 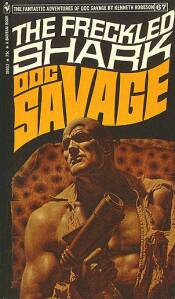 Reading The Freckled Shark which originally appeared in ‘Doc Savage’ magazine issue #073 (March 1939) written by Lester Dent under the house pseudonym Kenneth Robeson: ‘In his most exotic adventure, the Man of Bronze encounters the insane money lust of Senor Steel, president-dictator of Blanca Grande (a very unfortunate South American republic); decodes the awful secret of Matacumbe; and sinks -- for what may be the last time -- into the muddy horror of the primitive jungle...’

I re-read it last week and enjoyed it a lot. Doc Savage is one of my two favourite 1930s crime-fighters, along with The Shadow. There are some notable things about it.

-- We often have people bring Doc in to confuse things; this time we
get to see them beforehand and how they make this decision. (Tex and Rhoda are vintage pulp characters. They could have been spun-off into their own series quite easily.)

-- no super-villain or occult methods of murder for once. Just a
ruthless Latin American dictator. There are unintended frissons when
someone defies him, telling him that he can't lock people up on an
island and torture them without people finding out. Hmmmmm.

-- Doc has a bit of a Jekyll-and-Hyde period here, where he finds that he's actually beginning to enjoy being somebody else, rather than the straight-arrow scientist and do-gooder.

-- some nice bits of description, although I suspect that Dent (like
W.E. Johns) would have said that too much description slows down the
action for the reader.
Posted by Mike Hobart at 10:47 pm