my day in court 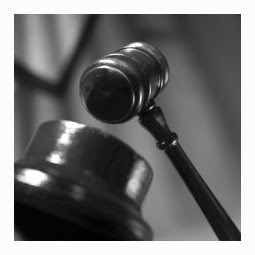 Not many people are happy to get a letter telling them they have to be at the Supreme Court at a particular time and date.

However since I had signed up for a special tour of the building with the Adult Education Department, I wasn’t intimidated.

They let the group in - there were about ten of us - then locked the doors. If anybody was passing in Salamanca Place, they must have wondered why we were going into the courthouse after hours.

We were greeted by a pleasant young woman. It took me a moment to realise that she was actually a Justice of the Supreme Court. She led us into Court #8, where she is sitting this month, and gave us a full description of what happened where.

I was surprised to hear that all proceedings are now digitally recorded; the last time I was in court the only electronics visible was a big square reel-to-reel tape recorder. For routine appearances that only take a few minutes the prisoners will often be there only on the audio-video link from prison.

There’s even a special court intranet that links courthouses around the country. Who knew?

The judge then led us down into the tunnel that links Court #8 with its mirror image Court #7 in the building across the way. Surprisingly, the tunnel zig-zagged and curved to an alarming extent. It seems that instead of going in a straight line it follows the edge of the property line around the court complex. It is not a place you’d want to find yourself during a power cut.

The courthouse was only built during the 1970s but is looking a bit tired and in need of updating. The oldest and least modern part of the whole place are the holding cells below the building. They are the classic jail-house cells -- thick metal bars, furniture fixed in place and big padlocks that would have been at home in the convict era.

Much of the court’s work is done on computer these days, but they still have a large library. We asked the judge if she ever needed to consult the old law books and she said she had been down there just recently to look up a 19th century case.

Our final stop was the judge’s own chambers. There were some personal touches (like the framed drawing of Rumpole of the Bailey) and her robes and wig ready for the next trial. The current Chief Justice is doing his best to simplify the robes, and possibly do away with wigs altogether. It would take away a lot of the atmosphere of the court, I thought. After all, every trade has its uniform.

90 minutes later we were back out in Salamanca Place, with the seagulls wheeling overhead in the floodlights that illuminate the historic buildings. It was hard not to feel a passing twinge of relief. It was a nice place to visit but I wouldn’t like to stay there....
Posted by Mike Hobart at 11:48 pm