Who is the Doctor

Enjoying the five-part Doctor Who audio adventure recently broadcast on BBC radio (it has been available on CD for some time, aimed at the audiobook market).  Hornets' Nest is... well, let the author explain it:  "An intricate and macabre series of interlinking tales perhaps best listened to on winter evenings. This creepy epic leads us step by spooky step towards the darkest nights of Christmas as the Doctor tells tales of his most recent escapades to his old friend and colleague Mike Yates and together they prepare to fend back the deadly and bizarre forces of darkness." 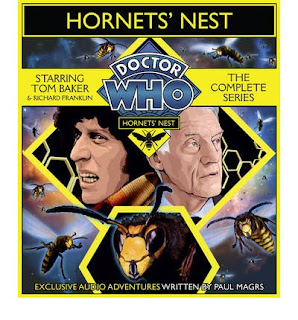 It's really nice to hear Tom Baker and Richard Franklin reprise their roles from the old television series.  Even after all these years, they slip back into the old characters straightaway.   Maybe I'm blinded by nostalgia, but I thought this was a very entertaining series so far.