The temperature went down to 3° last night but the morning was fine and clear -- it was such a nice sunny day that Julie put the chickens out on the back lawn to get some fresh air. I took some pictures with mixed results. 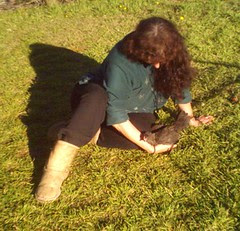 I haven't updated very often this week because I've been unwell. Maybe I had some sort of virus circling me early in the week. I felt tired and lethargic early on, but I didn't pay much attention to it until Wednesday.

Ironically it was the day that I had my six-monthly appointment with my endocrinologist. He was satisfied with my blood and urine tests and said to come back in December. I felt fine then, but I got steadily worse during the afternoon till I crawled into bed wondering how I was going to go to work the next day.

Fortunately I felt a lot better when I woke up, able to face the vagaries of an afternoon battling with recalcitrant office equipment. When we finished for the day it was dark outside and I walked round the corner to post some letters. The night air was cool and crisp and I could see the Southern Cross low in the sky, lying on its side.

I'm quite enjoying the new series Stargate Atlantis but I'm not sure why our local television station is galloping through the show at the rate of three episodes per week.

What's their hurry? We're not up to the next Olympics already are we?

One of the dangerous things about the Internet is how easy it makes buying stuff. You tick a couple of boxes, put in your Paypal ID and ten days later a parcel lobs into your mailbox.

That's how I came to buy yet another four MP3 discs of old radio shows. A neat little package arrived from Adam in Toronto containing four shiny little objects containing hundreds of hours of Dimension X, X Minus One, David Harding Counterspy and I'm Sorry I'll Read That Again.

Finding time to listen to them all is another matter of course.

Our local paper The Mercury is the latest to introduce the new puzzle Sudoku, which they claim is sweeping the world.

I had a look at it after all the hullaballoo and wasn't that intrigued. All those numbers and squares. Too much like mathematics homework for my taste.