Jesus knew the most vital relationship we can have is with God through his teachings.

Sitting in the pews on Sunday morning, we heard Rob musing that all too often the church is in danger not from external enemies but from internal strife.


Spring solstice is tomorrow I think. Which probably explains the vibrant hue of the banksia roses in my driveway this month. You should see them by moonlight (I don't think it would come out in a photo though). 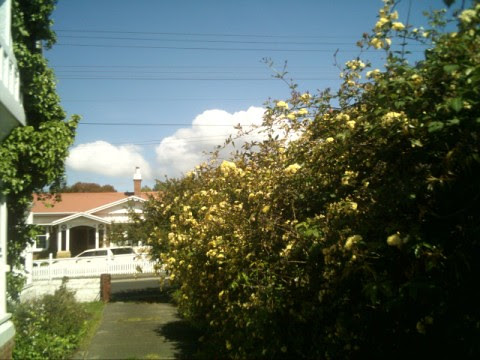 Sunday night Julie arrived back from her trip to Victoria. She was tired from travelling all day and footsore from walking all over central Melbourne. Her visit to the Caulfield Cup had been exciting if not profitable.

Least favourite part of the trip: sharing a room with someone who watches breakfast television every morning.

Went in early to work on Tuesday after someone phoned in sick. I had been hoping that the extra time in the office would allow me to finally fix the problems with the e-mail -- this month we could almost have Microsoft Online Crash Analysis as our home page.

The diagnosis said that downloading the Service Pack 2 update for Office would solve the problems. That sounds all right, but on a dial-up connection it's a three-hour download; I made four attempts and every time the connection failed before we passed the three-quarter mark. *Sigh*

I tried one of the Microsoft forums but the only productive suggestion was to get a friend with broadband to download it for us and burn it onto a CD.

Rob is getting impatient about these problems with the e-mail. What good is a computer that doesn't work, he glowered. But then he is a Mac man so he's always willing to believe the worst of a PC.

Gave Kay a lift to the supermarket Tuesday evening. Last week she bought 30 blank video tapes. The week before she bought 50.

How many did she get this week? "I'll have twelve," she said. That's twelve five-packs, meaning 60 tapes.

No wonder her video recorders keep breaking down. They run almost non-stop day and night.

Speaking of television, I was interested to see that an American has published a book about how to be a reality TV contestant. As part of his research he interviewed a lot of people who'd been on various programmes in the genre.

Nearly everybody who'd taken part in reality television now regretted it, saying that it had messed up their lives. The one exception was The Amazing Race -- nearly all the competitors on that show said they'd thoroughly enjoyed their time on the show.

I'm not surprised. The urge to appear on such programmes is almost a guarantee that the person in question has something awry in their brain.

DVD Jon joins MP3tunes.com
Jon Lech Johansen , better known as 'DVD Jon', is to join MP3tunes.com as a software developer.
I accidentally got here but I really liked it.

I have a ##make money on the internet## site. It pretty much covers ##internet business## related stuff.