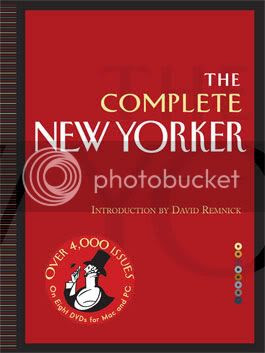 Just received in the mail last week was a book-and-disc set that I've been eagerly awaiting.

Yes, complete. Every word and picture from 4,000 issues of the famous weekly magazine. Every cartoon, every article, even every advertisement.

It comes in a folder that contains a book of highlights and eight DVD discs containing the entire run of the magazine to date.

As I unpacked the parcel, my sister called from the next room "Is everything all right?"

"That sharp intake of breath usually means there's something wrong."

The feeling of euphoria I was experiencing would have been difficult to put into words. In my hands I held something akin to the holy grail of magazine reading. As a teenager I had been a regular reader of The New Yorker and the sadly-missed British weekly Punch from the time I had been old enough to range freely through bookstores and libraries.

It had always been mildly irritating that I had been able to locate only two of the three volumes that collected the short stories from The New Yorker. Now that mattered not at all. Here in my hand I held all the stories that had ever appeared there. Every story, every review, every humour piece ... James Thurber, E.B. White, Dorothy Parker, Garrison Keillor, John O'Hara.... all of them were here.

I almost trembled at the thought of all that reading contained on the discs I now owned. (This was probably the only book in the world that I would have paid $65 postage for!)

The only thing that gave me a qualm -- will I live long enough to read through them all from start to finish. Should I start with my favourite authors and read them first or begin at the start and try and make it through to the present day?

But that decision can be made later. For the present, I feel a warm glow just from looking at the cover of the book on the other side of the room.

Had a glance at a couple of pundits on the Net who had reservations about the set - one expressed concerns about the legal implications of magazines being allowed to sell their collected works, while another moaned about the technical aspects of the set. Yes, maybe so, but I'm still glad it exists.

It's just a shame that with November being National Novel Writing Month I won't have the time to devote to reading that I normally have. Roll on December 1st!

Daylight Saving started on the mainland this week. Tasmania usually puts its clocks forward three weeks ahead of the other states, which is a bit of a nuisance for travellers.

Even staying home it can be a problem. Three weeks is just long enough to get used to national radio programmes and some television shows being an hour later. Then the following week we're suddenly back in line with everyone else again.

The history behind this is that Tasmania adopted Daylight Saving before any of the other states, partly as a reaction to a power shortage caused by a very dry year. When the other states took up the idea, they adopted a shorter period of time.

In fact the further north you go the less enthusiasm there is for Daylight Saving. When you hit the Queensland border, they would prefer less sunshine, not more, and steadfastly refuse to have any truck with the idea at all.

The poultry population at my house has changed slightly. One died and a couple were big enough to go back to my sister's place. Another chick was brought over because of an injured leg.

Julie has been trying to fix his leg, binding it up with tape so that he doesn't flail around helplessly and hurt himself further. I don't know how much use this is -- the last chick with this problem lingered on for a couple of months until it finally died.

Sometimes I surprise myself.

Since I discovered how to record radio programmes directly onto my computer I've been using that to time-shift some of my favourite shows for later listening. This morning we were listening to Sunday night's The Coodabeen Champions and Greg Champion played two songs about Phar Lap and the Melbourne Cup that he'd just recorded.

Julie said she really liked the two songs. Was there any way she could get copies to keep on her computer. I considered.

"Well, I've never actually done it, but I know it can be done. Give me ten minutes."

So I used the Audacity program to open the MP3 file, found the two songs and cut and pasted them into a fresh Audacity file.

Then I saved them as MP3s and transferred them onto the flash drive to hand over to Julie.

It was amusing to think how surprised I would have been a couple of years ago if I could have seen myself doing this!