Wow, the NaNoWriMo novel-writing contest is harder than I thought! Yes, I can write 1700 words in a day, but trying to write that amount every day is difficult and I'm already falling behind.

It didn't help things that we had a busy weekend.

Saturday I had Kay and Chris visiting in the afternoon. I spent quite a while convincing Kay that she could get out of Jury Duty this month -- she'd been planning to get up at dawn and walk into the city to get there on time. I told her that I was sure she qualified for a medical exemption under the guidelines on the second page of the letter ("Second page? There's a second page?").

She was happier about the rest of the afternoon: an Arthur C. Clarke book she was seeking was unavailable, a local bookshop told her. Nonsense, I said, and brought up Amazon.com on my laptop. In about 15 minutes we had a copy ordered from an American specialist shop.

Sunday morning, after listening to a guest preacher from the Australian Family Association we attended a farewell luncheon for one of our congregation -- she's returning to Mongolia where she works as a missionary and medico. She's being transferred from the capital Ulaan Bator to a town with an even less pronounceable name.

Then it was out to the historic Theatre Royal to see a live show featuring Graeme Garden and Tim Brooke-Taylor: The Goodies: still live on stage. There were also some filmed inserts featuring the third member of the trio Bill Oddie plus a couple of archive clips from their early work. 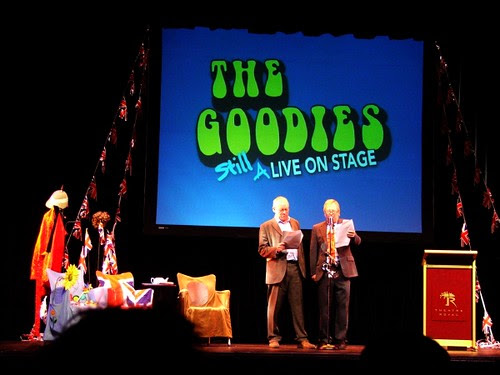 I was tickled to see that not only did they mention their work on the 1960s radio series I'm Sorry I'll Read That Again but they brought out an old-fashioned radio microphone and re-enacted a scene from the show, complete with sound effects.

From there, my sister Julie went on to see her friend Sippa who was at a dinner for a classic car club that was holding a rally in Hobart that weekend.

Monday morning I was a wreck. I was so tired that I didn't get out of bed till about two hours later than normal. It was a really hot and sunny afternoon too - the official maximum was only about 26º but the thermometer in my kitchen registered 30º (which is about 86 in the old Fahrenheit scale).

We fed Julie's animals then I took a nap for 20 minutes to give me the energy to go out to the monthly pub quiz night run by the Irish Association at the New Sydney Hotel.

For once we had a full team and our table was completely filled. Leah and her husband pulled their weight when it came to the question about identifying CD covers; I'm a dead loss when it comes to music of the last twenty years.

The scores seemed a little funny and Julie went round to look at the scoreboard. It turned out they'd added 19 to 7 and got 16! They also failed to double the points on the correct round for our bonus round.

But -- and this is a bit but -- in the end our team The Amnesiacs were successful in topping the board in the Gold category. "We win! We win!" "We are the champions...." "Hooray for us!"

The happiest member of the winning team, though, was Jan's little boy Jamie. Julie brought along a small cardboard box from her place and he went home with a young duckling to raise.

The saga of our e-mail problems: part the umpty-eleventh.

If you've been following the long painful story of the church office's problems with Outlook, you know I haven't done too well with downloading updates. The last lot seemed all right, but insisted that I needed XP Small Business disc. I couldn't locate this.

My boss, R1, had a look through all the CD-ROM stuff under the shelf and eventually discovered it misfiled in the Norton Systemworks box. So we inserted it and hit the install button.

The result was that the update registered as installed but Outlook, instead of being just unreliable, now stopped working completely . The good news was that I discovered that we could still send and receive new mail via Outlook Express even if we couldn't access our old messages.

For the moment, I'll settle for that.

Robert Reed's short story "Finished" is the first science fiction story I've read in many years that made me want to sit down on the spot and write a fan letter to the author.

The concept, which many writers would have spun out into a full-length novel instead of 13 pages, postulates a world in which there are three stages of life: the living, the dead and the Finished. The third state of being is a unique sort of immortality in which the person cannot change either physically or emotionally -- effectively a high-tech zombie.

This remarkable story appeared in the September 2005 Asimov's Science Fiction, which is issue #356.

Fans of Dionne Warwick will problem want to visit the BBC Radio 2 website and listen to this week's Friday Night is Music Night which is a special episode devoted to her singing. Some great stuff here, folks.

The nation's most famous horse race the Melbourne Cup was run last week. For once the horse I picked came to the front as they neared the winning post, thundered forward into the pack at the lead.... and finished fourth. More like my usual result.

You wouldn't have been surprised if you'd been watching me accompany Julie into the betting shop. I blundered around and obviously had no idea what I was doing or where I should be. But that's an occupation hazard for punters during Melbourne Cup week.

CLICK HERE TO SEE MY ARCHIVES
Posted by Mike Hobart at 10:45 pm