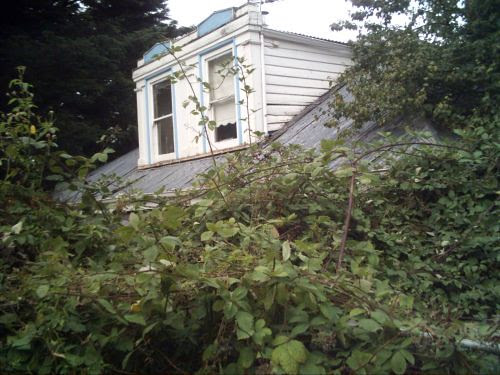 The beginning of March marks the official beginning of Autumn - or Fall as our American cousins like to call it - and indeed the first day was refreshingly cooler after those recent oppressively hot days.

It didn't last of course. Friday we had an appointment to see the man who was cutting back the undergrowth at my sister's house, then we were going to go visiting with one of her roosters. (Yes, she was taking with her the chicken that's so tame he stands on her wrist while she walks around.)

But the weather wasn't going to co-operate. We saw the guy at Julie's house (and he's done a wonderful job on clearing the front of all the greenery that was choking it - see above) but the temperature just kept climbing.

Julie looked overwhelmed by it and when it hit 36º [about 97º in the old Fahrenheit scale] we gave up and phoned to cancel. The humidity was just too much for us to handle.

I was surprised the next morning to find that the temperature had dropped 20º without the usual drama of a thunderstorm or a torrential downpour of rain.

Incredibly, the maximum and minimum temperatures for Hobart on Saturday were both just 16º.

Monday saw the switching on of the ABC's new FM transmitter in Launceston, transferring ABC Northern Tasmania [the old 7NT] from AM to FM. ABC Hobart remains on AM, but you have to wonder how many more years that will last.

Since FM broadcasting started in Australia back in 1980, the commercial stations have led the exodus from the AM band. Here in southern Tasmania, the AM band is now the province of the ABC and a handful of low-powered community stations.

An entire generation of young people have grown up who probably don't even know there is an AM band on their radio sets.

Still, not to worry. By the time ABC Hobart gets around to going FM, we'll probably be listening to it on radio sets that have streaming internet audio built in.

The first radio set I ever owned had big glowing valves that you could see warming up through the back of the case. That seems a long time ago (and indeed it was - that would have been around 1958).


An example of how we're isolated from the harsher aspects of the modern world.

On Sunday morning the preacher asked for prayer for a friend of one of our congregation (they both sing in the same group) - his son had just been murdered. There was an audible gasp of shock from the people sitting around me.

It started me thinking how removed from violence we are. This is the first time that even a friend of a friend has met an untoward death, and I can't think of the last time when somebody I knew was involved in any sort of violent incident.

Yet this sort of thing is taken for granted in many of the so-called civilized societies around the world. I toddle along in some sort of parallel universe, vaguely aware that somewhere in other places people are being shot, stabbed or strangled, but for all the effect it has on me it may as well be happening on Mars.

Maybe that's why the Port Arthur shootings shook Tasmania so badly in 1996. It was the sort of thing that happened "somewhere else". It was many years before we regained our traditional equanimity.

In fact a couple of years later when one of the tabloid television programmes broadcast an item about killer Martin Bryant that included a sound grab of his voice, I reacted badly to the string of previews for the show.

It was completely out of character for me, but I grabbed the telephone and rang through to the answering machine of the programme in question. "How can you do this?" I barked. "Have you people no shame??"

Apparently the producers were taken aback by the hostile response to the segment and made some token apologies (though it didn't stop them running it). Many people must have felt the same way that I did.

In fact just writing these few words and looking up the exact date of the tragedy is enough to make me feel uncomfortable, ten years on.

Especially noting the number of idiots with web pages claiming that the shootings were part of some conspiracy. If I'd happened to be at Port Arthur that day, I would probably have been dead at the end of the day. Pardon me if I don't feel like considering your crazy ideas objectively.

An intriguing piece in Media Life:

Only a few years ago, many people believed the internet would grow forever, adding new users as it went. Whatever saturation point there might be was years off, only to be reached when all of the country’s households were wired.

But it turns out saturation is already upon us, or nearly so. According to a study by Park Associates, a Dallas-based market research agency, growth in internet penetration this year will rise just one percentage point, from 63 percent to 64 percent. That translates to some 39 million American homes without internet service, and with only 2 million of them planning to go online this year. Roughly 29 percent of the 1,000 households surveyed said they do not even own a computer.

The verdict seems to be that it's something that will change as the generations do -- like electricity and telephone connections, which are now nearly universal. The modern generation are unlikely to stop using the internet, so its penetration will gradually become almost ubiquitous.

It begins with The Monster rescuing The drowning girl. They are left alone on the page to ponder their fates and consider their past. The Monster becomes increasingly concerned about the development of his character. He is reluctant to become the hideous creature that Shelley appears to be creating.

In a desperate attempt to rewrite history The Monster, The Drowning Girl and a highly versatile The Rustic struggle to keep Mary on the page whilst Percy, Mary’s husband, becomes a constant distraction.

This Hideous Progeny is by Paul Livingston, perhaps better known as cult comedian Flacco. The cast includes Ralph Cotterill as The Monster, Lucy Bell as Mary Shelley, Meaghan Davies as The Drowning Girl, Keith Robinson as The Rustic and Richard Sydenham as Percy.

Listen to live music from deep in the heart of Texas on KZQX. Just click here.


What time is it over there? Visit the World Clock