Monday saw us set off on a "mystery bus trip" with a group from our church. I was up before sunrise so we could feed my sister's animals before meeting up with the bus group. 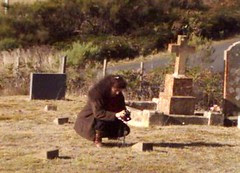 We set off for the east coast of Tasmania and a few words in the driver's ear meant we made a special stop at the Woodsdale cemetery. This is where our great-grandmother is buried and after a minute or two we located the grave marker. 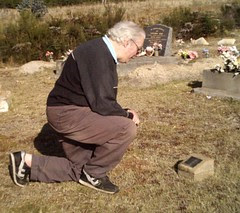 We have been here before, but not for about 25 years.

Julie would like to organise a special trip down to Woodsdale, which does have some tourist attractions in spite of it being so small there isn't even a sign to let you know you've arrived. 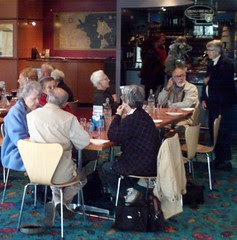 Lunch at the Blue Waters Hotel in Orford was a pleasant affair, then we took a stroll along the foreshore to admire the seascape. 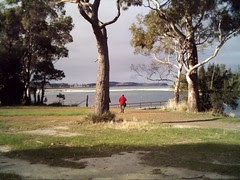 Listened to a 1944 episode of Suspense titled "One Way Ride to Nowhere". Alan Ladd stars as a man who takes a roller coaster ride and finds that at the other end there's an extra passenger - a dead psychiatrist. Intrigue and deceit on the midway unfold in typical film noir style.

Dark Fantasy was a minor 1940s series originating in Oklahoma City, but the episode "Pennsylvania Turnpike" does a nice job of slowly building the atmosphere in this tale of a hitch-hiker who doesn't seem sure what century he's living in. The climax, as often is the case, doesn't match the Twilight-Zone-style build-up but overall it's not bad.

Less subtle is the 1945 Sealed Book episode "Hands of Death", which is the radio equivalent of one of those old black-and-white B-movie thrillers. A mad strangler, his manipulative brother, the greedy butler... all that's lacking is Boris Karloff. (Notable is the amount of padding, including rambling introductions and excessively long musical interludes.)

And to finish off, listened to a 1940 newscast with Edward R. Murrow in London. We tour the darkened city during an air raid, ending up in Whitehall where the novelist J.B. Priestley muses on the future that lies ahead. Stirring stuff from CBS.

CLICK HERE TO SEE MY PICTURES
Posted by Mike Hobart at 6:24 pm