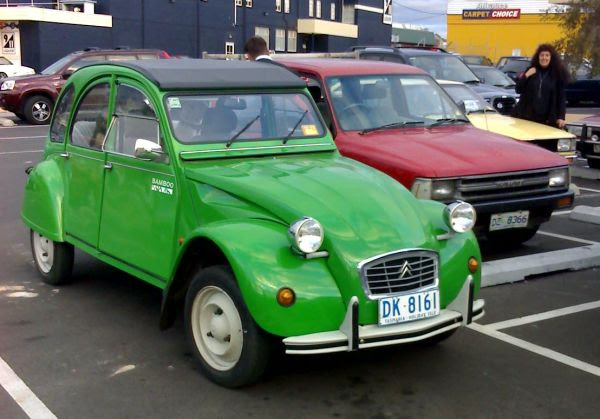 This is the sight that greeted us when we parked in Moonah to visit Leah at Café 73. Julie was transfixed – an immaculately restored 2CV containing a Dalmatian and a German Shepherd. I can think of nothing more calculated to have her reaching for her camera.

I wasn't feeling the best on Friday. I was late getting to bed but I thought I'd had enough sleep, yet I felt worse and worse as the morning went on. The Blood Glucose test was a startlingly high reading of 8.7 before breakfast – yow!

It's a popular urban myth that having a flu shot causes you to get the flu. I'm beginning to see why people believe it. I spent all morning coughing – "You're sickening for something," said my sister and she may be right.

In the evening I had just finished watching West Wing on television when I suddenly felt dizzy. If it wasn't for my eyes being open, I might have thought my chair was spinning slowly round and round. It didn't last long, but then you wouldn't want it to.

To add insult to injury they're cutting the electricity tomorrow morning to work on the power in our street, so I can't even say "I'm sick, I'm going to stay in bed and ignore the world."

My sister spends a lot of time on the Internet nowadays doing research on our family tree. This week she extended the genealogy one more step back and discovered that Madeleine, one of her oldest friends, is actually a distant relation. Madeleine was so excited at this news that she phoned her mother interstate to tell her the exciting news.

I hope this doesn't mean they'll be coming round wanting to borrow our lawnmower or something similar.

Tarantara! Tarantara! is sort of a potted history of Gilbert & Sullivan including all their greatest hits. If you know little or nothing about G&S this is the show to educate you. A lively presentation from (of course) the Gilbert & Sullivan Society.
And Then There Were None by Agatha Christie was the May attraction at the Playhouse. I think everyone knows the plot of this one by now, but it was well staged and it was interesting to see whether or not the director had decided to follow the lead of the London production and follow the original novel rather than the 1943 stage version. (I'll never tell!).
Ten Bears is an eclectic folk-rock trio fronted by former Hobart performer Josh Wilkinson. Listening to him at the Moonah Arts Centre was pleasant, though I hardly understood a word of what he was singing. Two demerits to the PR person who described the act as "a gentle, ethnic influenced journey into mysterious waters, melded with a more modern sounding rock element, intended to invoke a subtle whisper of ancient wisdom"(!)

Coming up next: Pride and Prejudice the stage play.

just fyi... a flu innoculation (or any vaccine that you're given) does contain the virus that you're trying to avoid getting. the idea is that if it's administered in a low dose, it won't make you sick, but it will stimulate your immune system into developing antibodies for that virus. so it's like a low-grade version of the illness, so that when the real big meanies come along, you already have the stuff to fight em with.

it's pretty common to get a slight fever and other flu like symptoms as a result :)