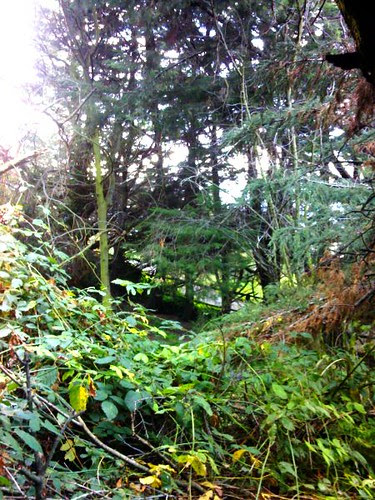 My sister takes up a lot of my time, but she certainly keeps me in touch with the real world of animals and plants.

Take Sunday night for example. We'd been over to her place to feed her animals. She went out with the horse and the poultry while I looked after the cats, then she took the dog food out to them. Finally we were driving back to my house.

Just as we turned into my street, she suddenly said "Hold it. Stop the car." I saw something in the headlights, moving across the middle of the road. As I pulled up, I realised that it wasn't a kitten or a puppy but a small rabbit.

She got out of the car and approached carefully, but the rabbit wasn't interested in getting any closer and zig-zagged down the street a few feet at a time. "He doesn't look like a wild rabbit. He might be a pet. I'll see if I can catch him."

I pulled the car over to the side of the road, angling it so the lights lit up the footpath for her. She moved back and forth, following the rabbit's progress. In and out of the front yards of our neighbours – I hoped that none of them were suffering from insomnia and might happen to look out their front windows.

After about ten minutes in the crisp night air she gave up.

This isn't the first time that's happened to her. Once she was driving through the northern suburbs and saw a rabbit hanging around by the side of the road.

When she tried to catch it, it dashed down next to a house and into the backyard. Julie shut it in an outside toilet (maybe a shed) attached to the house, hoping that the householder either owned the rabbit or knew who did.

I couldn't help thinking that if they weren't the owners, they were going to be surprised when they went into the backyard in the morning.
Posted by Mike Hobart at 11:58 pm