homage to a cat alone 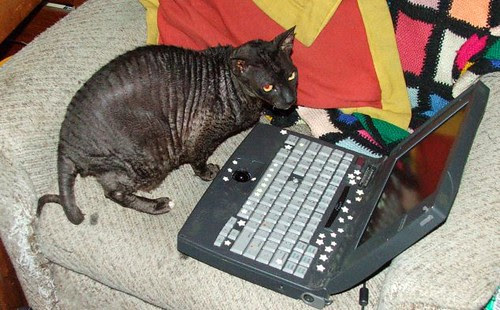 It's never good when you lose a pet. In this case it was particularly upsetting for my sister because her cat Jezebel seemed to be on the mend after some extensive (and expensive) medical care.

She had regained her appetite, looked a lot brighter and had even caught a mouse for the first time in years.

Unfortunately she went into a sudden decline one Monday. At midday she was perfectly normal, then she had some sort of bad turn and by 7 p.m. the Vets had said there was nothing more they could do for her. A sad day indeed.

Most of my spare time in November was taken up with the international novel-writing project NaNoWriMo. The idea is that everyone starts writing on November 1st and completes 50,000 word stories by the last day of November.

I did finish the 50,000 words but it was two hours past the deadline, so I didn't get the coveted "winner" designation on the NaNoWriMo website. *Sigh*

My novel (or novelette if you prefer) this year was a psychological thriller set in the Australian television industry. I was so disorganised that I haven't even thought of a title for it this year.

I still had 6,000 words to write on the final day. I thought that if I really put my head down I might just do it, but it was a Thursday so I spent all afternoon working in the church office. If it hadn't been for that, I reckon I might have made it.

The Full Moon is on Tuesday December 5. The evening sky is now devoid of bright planets, but Saturn can be seen in the early morning sky near Regulus, the brightest star in Leo. By the end of the week, keen-eyed observers can see Mercury, Mars and Jupiter just above the horizon half an hour before sunrise, a foretaste of the rare triple massing next week. (Personally I hope not to be awake at that hour!)


QUOTE OF THE MONTH:

If you actually believe in the value of individual freedom and responsibility (which not many people do, though many claim to), you pretty much have to agree that people have the right to decide for themselves what to do with their own bodies—if they also accept responsibility for the consequences. And that is something that our current culture has aggressively discouraged, to the point of making it practically impossible.

Congratulations on finishing the 50,000 words, on time or not! That's amazing. Hey, I'm a baby boomer, too. What's it like living in your part of the world?
Rhea
The Boomer Chronicles
http://www.thegeminiweb.com/babyboomer/index.php