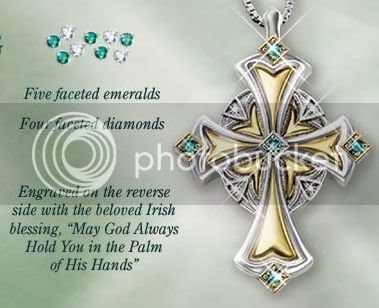 I'd like to buy you all an Irish Cross as a Christmas gift, but since I can't here's a picture of one instead.

The Christmas season is coming on fast, but I don't recall ever being as disorganised as I am this year. I always seem to be tired nowadays. I thought it was tiring back in the last years of my mother's illness, but I don't feel much better this year.

I feel as though I'm living next to a giant building that's blocking out the sun, keeping me in the eternal shadow of its shade. Maybe I'm having an anxiety attack or something.

At least Thursday afternoon at the church office wasn't quite as bad as I had thought it might be. Our minister Robert had done two of the three orders of service and brought them in as PDF files, so that was a big help.

With Christmas falling on a Monday and the special Carol service on Sunday night, we had to do three lots of printing -- one lot for Sunday morning, one for Sunday night and a third lot for Monday morning. The photocopier was behaving itself, thanks heavens, unlike some recent weeks.

I had feared we might be there till 6 o'clock or after, but in fact we finished at 5:20 pm. Surprisingly early, I thought.

QUOTE OF THE WEEK:
Part of the appeal of the radio in the early days was that it was a participatory adventure. It was sound without sight. The listener had to supply the setting for the drama and the locale for the news report. This partnership now is gone as the TV provides everything needed. Everything but imagination. -- Bruce D. Callander

I hope that's quite clear.