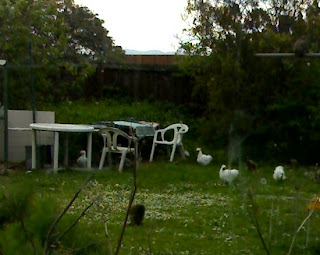 Friday morning I enjoyed a rare hour of peace and quiet. There's a little window between when I finish feeding the chickens in the back yard and when I have to try and get my sister moving. I had breakfast, checked my e-mail and read the comic strips.
Later in the day I went in to the pet-food shop to get meat for my sister's cats and took it over to her house. It was so warm and humid over there that I suggested we go into Subway for coffee and a snack -- their coffee is all right and their air conditioning was definitely a plus in this weather.
At dusk we sat out in my garden with a glass of wine and watched the poultry as they paraded by. I don't mind having them there, but I look forward to the day when Julie finishes extending her hen house and takes some or most of them home.
In the mail today, received an e-book CD containing all 181 Doc Savage novels in PDF format. We all know that you aren't allowed to post these on the Internet, but they don't seem to stop them being sold on E-Bay. Remind me to tell you about the South Pole Terror sometime.

A fascinating interview tonight on Rod Quinn's radio show with David Ansen, the NEWSWEEK movie critic: "On January 26, 1958 (the date is written in pencil), I began keeping a list of all the movies I'd seen, using lined notebook paper that I further divided in half so that I could get upwards of 50 movies per page. I was 12 years old. I've kept up the list my entire life. It now fills 146 handwritten pages—close to 8,000 movies, though the number would be higher had I added all the movies I saw on TV."
Rod was especially interested because he keeps a similar list. I used to do the same thing.
Of course there was a very practical reason for this in the 1950s and 1960s. There was no Internet, no IMDB, not even any of those movies-on-TV paperbacks that you see in every bookstore.
It's hard for anybody under 40 to understand those days. In my young days I loved science-fiction movies but there was no way to have a list of all the SF films that had been made unless you imported an expensive specialist publication from the United States. (There was a copy in the reference section at the State Library but I could never have afforded a copy for my own use.)
I used to go through the magazines like TV WEEK and TV TIMES and make a note of any movies on the late-show that I hadn't heard of before.
I thought it quite wonderful the publication of "Science Fiction in the Cinema" by John Baxter (London: A. Zwemmer, 1970; New York: A. S. Barnes, 1970) which I was actually able to purchase.
It's a very different world today, where (to use a metaphor from the early days of the Internet), we are swimming in a sea of information.

Called in at the shop/post-office around the corner from my sister's house to pick up a registered letter for her. While I was there, I bought a comic book and the girl behind the counter looked at it, looked at me and said "Are you one of those people who are interested in old Phantom comic books?"
I reeled back in horror. "Is it that obvious?" I said tremulously.
"We just got in the end-of-year special issue this morning if you want one."
"Oh. Yes, I'll take one while I'm here."
Selling an average 30,000 copies an issue, The Phantom remains this country's favourite comic book. There is simply nobody else who comes close to the wide readership that the Frew Publications title has.
That's close to a million copies a year in Australia. Total Frew sales since 1948 are estimated at a breath-taking 35 million copies.
Posted by Mike Hobart at 12:50 am

Was wondering whether you would like to exchange links.

My blog is on creative thinking, media, art, TV, film, animation and travel.

My background is in advertising account planning (planner: person behind 'big idea' in an advertising campaign, TV research, travel, writing, and more)