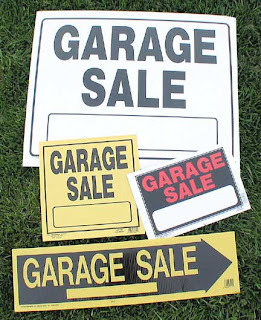 Darkness. That's all I saw when I opened my eyes, but I couldn't go back to sleep. Today was Garage Sale Day in my street.

One of the women in the street had rounded up half a dozen households to participate in a joint Garage Sale (what they call a yard sale in some places). We split the cost of the advertising and benefited from being able to avoid the sunrise wolf-pack.

If you've ever had a garage sale, you'll know that there's usually someone banging on your door at 5 a.m. wanting to get a preview of what you're selling. This way, we just announced that there would be a garage sale in my street commencing at 8 o'clock. Right on that time, everyone who was participating opened their doors and put out balloons on their front fence.

That didn't stop a couple of cars driving up and down the street early looking for any signs of life. Dealers and bargain hunters hoping for a chance to get in early.

I felt like a vampire who'd been dragged out of the crypt by Dr Van Helsing, but as the sun came up I gradually got it together.

Originally I'd planned to spread everything out on the front lawn so that the passing trade could see everything, and I wouldn't have to depend on people wandering down my driveway.

Then at dawn there was a shower of rain and I thought to myself "Oh no, I'll have to change my plans and put everything under cover in the carport." So I did, and of course that was the only rain all day!

It made for a fairly long day. I took up my position at 8 o'clock and watched the clock slowly progress round to 1 p.m. People came and went. Families with kids. Old couples. Young adults. A few people who were obviously dealers.

One man was as transparent as could be. He glanced at a cardboard box of comics and said off-handedly "Those are a bit modern" in a dismissive tone.

"Depends on what you mean by modern," I said, well aware of what he was doing.

"Bit of silverfish damage on a couple of them," he added. I shrugged and said nothing.

"Will you take ten dollars for the lot?" he said finally and I nodded.

It was so obvious what he was doing. He had seen a few comics in there that he thought he could sell at a profit, so he began by denigrating their rarity and quality before making an offer to buy the lot cheaply.

I could see what he was up to, but that box of comics had been in my For Sale section for the last ten years so I took the ten dollars and let him do with them whatever he wanted.

That was the biggest sale I made. There were a lot of browsers but few buyers. Several people asked if I had any old records or old furniture. I could have sold the bird cage by the back door a couple of times.

By 12:45 the neighbours began wandering about making noises about packing up. The family on the other side were pleased that they'd finally been able to sell that three-piece suite that had been taking up room in their garage all year. "Now the kids can play table tennis again."

I checked the takings. $19, less $5 for the newspaper advertising. A total of fourteen dollars for five hours sitting there browsing through old magazines while strangers rummaged through your cast-offs.

Anonymous said...
This comment has been removed by a blog administrator.
11:09 pm