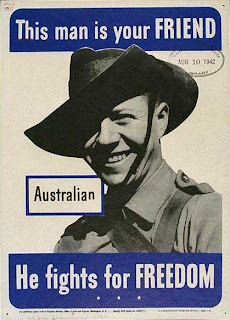 Anzac Day, my 58th birthday and the day that celebrates Australia's history at war.

It made for a thoughtful morning. Not only did I reflect on what I had and hadn't accomplished over the last twelve months, but it brought to mind thoughts of all the members of my family who'd served in the armed forces.

My cousin who went to Vietnam. My uncles who were in North Africa. Even my mother served in an anti-aircraft unit when Radar was a deep dark secret.

I took down from the shelf a battered little notebook that had been handed down to us from previous generations. It tells the story of my father's oldest brother, from the day he left home with his unit in 1915 till he sent it home from England a year later just before he left for France.

He never returned. In one of the many Australian graveyards in France, he lies to this day. We often think of him at this time of the year. My father's family mourned him for many years and among the bric-a-brac from the old family home are several framed memorials to the fighting men who were lost in a far country.

I found your blog talking about Anzac Day. My great uncle died at Gallipoli and is buried there. Even after all these years, you still think about the waste of all the lives lost.