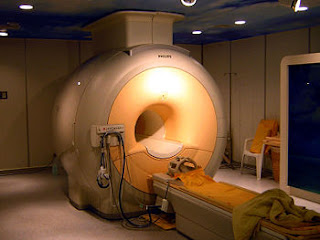 We want to study your brain. That's what the official looking letter from the Menzies Research Institute said. A study to contrast the brains of diabetics and non-diabetics.

OK, I thought, I'm willing to go along with it. An MRI scan, a blood test and a questionnaire. I could do that.

Saturday afternoon I present at Calvary Hospital. I'm not certain how much I have to do before the scan, but it turns out to be not much.

Since they're only interested in my head, I don't need to get undressed or even remove my belt. So long as I removed my watch, keys and coins it's fine.

They slide me into a long tube and give me ear plugs. Half an hour can be a long time flat on your back listening to a blacksmith in the next room.

They started off with a repeated bang-click-click, then after a few zing-zing sounds it settled into a steady clunk-clunk clunk-clunk.

I had a panic button in case I became claustrophobic. There was a little window so I could see out, but since they'd taken my glasses that was just a blur.

Thirty minutes isn't long usually, but I had no way of telling time so I tried to pace myself. I thought of some normal calming things for a while, then I sort of drifted off with the rhythmic pounding coming from all around me.

The next thing I knew I heard a muffled voice and I began sliding out of the tube. The technician looked down at me and said something but I couldn't understand her. Then I remembered the ear-plugs.

When I got my watch back, it was just half an hour.

If you're in a similar situation, I suggest you do what I did and don't look up the MRI page on Wikipedia until afterwards. I know if I had researched it in advance I would have found it hard not to think about all those atoms bouncing around in my skull !
Posted by Mike Hobart at 11:16 pm