"Now into its tenth generation, it's the world's biggest selling badge, with 32 million owners to its credit in its 40 year history. And, somewhere in the world, in one of the 140 countries where it's sold, someone buys a Toyota Corolla every 23 seconds." 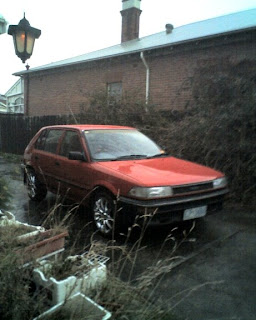 When I started looking around for a new car, I thought I'd end up with something cheap and boring. I am still a little surprised that I ended up with a flame-red Corolla with mag wheels. Hardly the sort of car most of my friends would expect me to turn up in.

I saw Robin Johnson at the theatre the other night and I mentioned I was getting a new car. "I'm not surprised," he said drily. Cheek!


When you've driven the same car for decades, it becomes almost part of you. You know without thinking how much pressure to apply to the controls or how close you can come to another car. Then you get a new car and suddenly everything is different!

It's actually quite scary. The first few times you go out, you're concentrating fiercely. If you can avoid stalling when you start off from a red light, you're doing well. And going round a corner is enough to make you break out in a cold sweat.

After a while it gets better, but I don't know how long it will take before I can just get in and drive off without consciously thinking about what to do.
Posted by Mike Hobart at 12:27 am

Toyota is nice car any way. When I was retired from my job, I bought a dream car for me.

I hope that You have safety days in Your car.