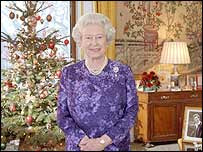 We got through Christmas all right, though I was remarkably disorganised and very tired.

I have always tried to stay out of the city the day before Christmas, but there I was at lunch-time on Christmas Eve in line at the bank. [Sigh!]

By the time we'd been to the Christmas Day service on Saturday morning, then the regular Sunday morning service, I felt so exhausted I went back to bed for two hours.

The Christmas Day service was packed. We had a seven-piece musical group leading the hymns (eight if you count the grandp piano I guess) and R2 preached. The collection raised a goodly sum for the work of the Australian Indigenous Mission which works with Australian aborigines.

Sunday was much more low-key, with only a fraction of the number attending. But you'd expect that on a Christmas long-weekend.

Christmas dinner we had at Jan's place – she's an old friend of Julie's and her mother amused us with stories about the two of them when they were at school. Also at the meal were Annette & Gunter who are from Darwin I think.

It was a very pleasant meal, and later we wandered out to the barn and inspected Jan's wildlife – three ducks, two chickens, three quail and a rabbit.

Jan is living up near Ridgeway, under Mount Wellington, where the air is so cool and crisp when you step out of the car that's still filled with air from the suburbs. There are green hills in every direction. It's a lovely spot.

The only disquieting moment came when the conversation turned to Jan's computer and she casually mentioned she had no anti-virus software at all. Julie and I exchanged a worried glance then said "Is your computer free at the moment?"

We downloaded the new AVG 7 and ran it for her – one Worm and three Trojans. When we told Jan, she just said "Really? How exciting."

Coming up to Christmas you expect things to be a bit hectic, but Wednesday night was more fraught than we could ever have imagined.

As usual I drove my sister Julie over to her house late that night so she could feed her livestock. She pottered about with the poultry and the dogs while I listened to the midnight quiz on the radio and fed the cats.

Julie rang me on her mobile phone to say that her horse Shadow had blood on his foot. Could I look up the number of the Vet for her.

That began a long unproductive series of phone calls. Don't believe it when you see the words "24-hour Emergency Service" in the yellow pages ads. Some of the Vets slept through their pagers, others never called back.

It was nearly 1:30 by the time we got through to a sleepy but helpful DVM.

She advised us how to administer first aid to the horse, since it would have cost hundreds of dollars for a house call in the middle of the night. We drove back to my house to gather up some tape and bandages; Julie said she could do it herself, but I suggested she might need somebody to hold the light for her (I also had visions of her grappling with a distressed horse alone in the middle of the night...)

Drove back to her place again – very little traffic on the roads at that time of the morning – and made our way to the paddock. The horse seemed reasonably calm and was interested in the bucket of feed that Julie proffered.

By flashlight, I could dimly see something dark coating his leg just above the hoof. He seemed on his best behaviour so I got down on one knee and took a really close look. Sticky red blood made it difficult to see, but there seemed to be quite a deep cut. The blood might have been oozing a bit; it was hard to tell in that light.

Julie slipped on the headstall and I held the horse still while training the torch on the leg in question. He looked askance at first when Julie began wrapping the bandage around his leg, but some soothing words and a caressing hand kept him calm.

The thick bandage went on first, then several times around with the insulating tape. "Does that look enough?" Another couple of rounds of tape. It seemed secure, but then I knew nothing about horses. Did they pick at their bandages like dogs do?

"He didn't play up as much as I thought he might," I said as we walked back to the house in the darkness. "No. You were quite good with him," replied Julie.

Over the next couple of days he seems to have coped well. The vet checked him out and is coming back in a few days to remove the bandage and check the wound.

Bad news just before Christmas with the passing of Anna, a member of our church since 1963. She was admired by all who knew her. Over the years she'd had an eventful life, including living in the Dutch East Indies when the Japanese invaded during World War II.

She had been placed in an internment camp while her husband Peter was sent to Japan as slave labour in the coal mines. Miraculously both survived.

We shall miss her.