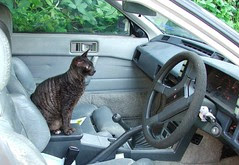 One of the odd things about the sunny weather is that Julie's cat loves sitting in her car in the afternoon. I think she enjoys the warmth that radiates from the vinyl seats after they've been sitting in the sunshine.

Christmas went off all right for a change. The first two Decembers after my mother died we simply didn't do anything for the festive season. We didn't deliberately ignore the season, we just put it in the "too hard" basket.

On Christmas Day we attended church then went on to my niece's home. Her partner was cooking the turkey on his elaborate barbecue - something I hadn't heard of before but which turned out to be quite successful.

What was startling was my great-nephew Nathan, who has grown two feet since I last saw him and now looks to be 14-going-on-22. A bittersweet reminder of how fast the years are flying by.

On Boxing Day we drove up to Ridgeway in the mountains for an afternoon at Jan's house. Many of Julie's old school friends were present. The conversation took some odd twists and turns -- one participant, who reads this blog, threatened me with bodily harm if I repeated her comments about shoes and sports bras. So I won't.

The standard of Yuletide television programmes seems to get worse every year. On the other hand, there was a lot of ABC radio programming that was worth listening to.

It is a little baffling that they're now podcasting The Idlers but not The Coodabeen Champions. The only reason I can see is the amount of music in the latter show.

Boxing Day also begins the annual Summer Festival in Hobart. Julie went off to the Taste of Tasmania on its first day on Wednesday.

I am growing fatigued after the last few weeks. I always seem to be tired, never getting enough sleep and always facing a long "To Do" list that I never seem to reach the end of.

Of course it could be something to do with the fact that I haven't had a holiday for about 18 years.

As we approach the New Year I muse on making some resolutions -- take more exercise, lose weight, read a short story every day, all the usual stuff. We shall see.