The Taste of Tasmania 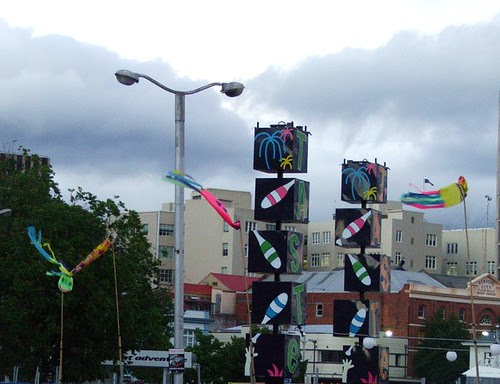 The end of the year brings with it the Hobart Summer Festival and the jewel in the crown of the festival is the annual Taste Of Tasmania. Food lovers and gourmands from all over the southern states head for the Hobart waterfront. Over 70 different stalls selling food and wine of every description.

Hard to believe that it all started 17 years ago as a stop-gap to amuse the public between the beginning and finish of the Sydney-Hobart yacht race. Now the yachties are still part of the festival, but no longer the main part. 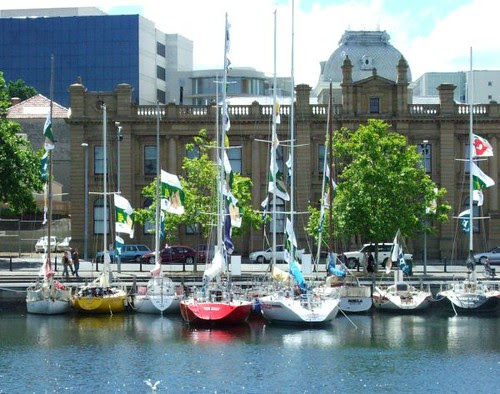 My sister Julie is a great enthusiast for the taste, as was her mother before her. She had me down there last week, but my enthusiasm was muted because of my bad back. I was more interested in finding a comfortable position to stand in than in perusing the banners over each stall. 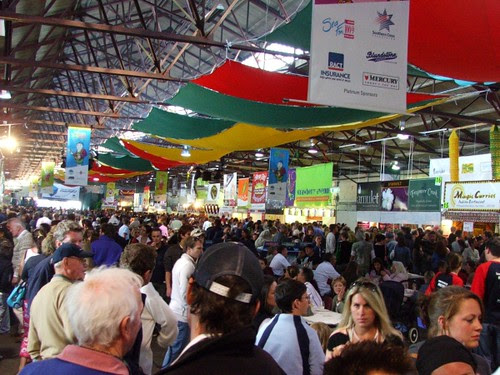 So we went down to the docks again Monday after Julie returned from her trip to Launceston where she attended the races (and was snapped by the press for a colour photo in the local paper -- fortunately the picture doesn’t show the cowboy boots she was wearing because of the bad weather!)

Things were more comfortable now that a cool change had come over. It was pretty crowded - it was after all the last day of the long weekend and a lot of people were having a final fling before going back to work tomorrow. But I enjoyed it a lot more than last time.

I dined on some delicious foods, washed it down with a refreshing glass of wine and finished off with some locally grown fresh fruits. Julie, as she traditionally does, finished the visit with an oyster shooter. (I’m surprised the stall that sells them doesn’t give her a gold card or something as their most regular customer.) 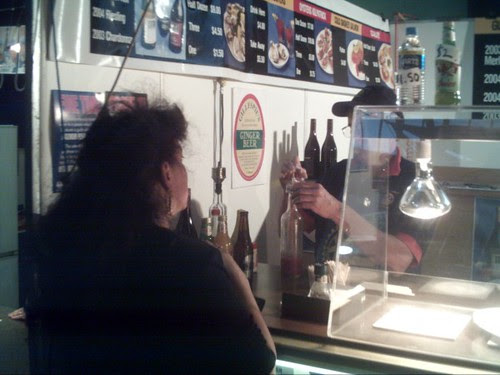 One of the extra attractions at the waterfront on Sunday night was a broadcast by those stalwarts of ABC weekend radio, the Coodabeen Champions. Greg Champion played the guitar and sang, while his three colleagues mingled with the crowd, interviewed celebrities and recounted the story of their cruise up the Derwent River on Saturday.

The 2½ hour programme even included what may be the world’s first live broadcast from the back of a merry-go-round horse when one of the Coodabeens rode into history with his microphone.

It was a long time between drinks — the last time they were here was in the early days of the Taste, back in the 1980s — one of their most enjoyable broadcasts, I thought.

Speaking of radio, Anne Fitzgerald and Lisa Forrest are standing in for Tony Delroy while he’s on his annual leave. It’s always interesting to see how the summertime stand-ins handle the most demanding part of the show, the midnight quiz. Listeners are always quick to point out any errors in handling this long-running segment.

While my sister was away for the weekend, I was responsible for feeding her livestock. It’s not the first time I’ve done it, but the weather this summer has been very favourable for plant growth and I could hardly get down her driveway without bending double.

The day before she left, I got out the gardening equipment and cut a path down the side of the house so I could get to and from the hen house and the creek. Getting down there after dark the last thing you want is a branch or a blackberry cane across the face.

Each visit begins with being greeted by the cats, then comes feeding the ducks and geese who are free to range over the property but are always there for dinner. The majority of the roosters are shut in overnight, to avoid aggravating the neighbours. Some of the chickens have their own quarters too because Julie wants to breed from them and preserve their bloodlines.

Then it’s time to ford the creek and up to the shed, where the horse is invariably waiting for his food. If you’re too slow, he gives an impatient whinny that carries from one side of the duckpen to the other.

The final sequence is feeding the dogs, who are always very excited at the thought of dinner. They can hardly keep still long enough for you to put the dishes down. (One of these days they’ll knock me down and grab the food from my supine body.) After they finish licking out their dishes, I throw them a carrot and sneak out while they’re munching on them — cheaper than dog biscuits and just as popular.

Then (after saying goodnight to the cats) I can go home. 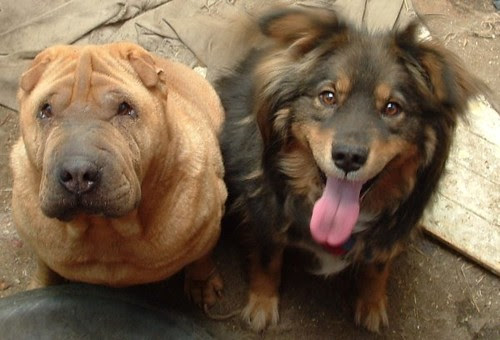 For Christmas, Julie gave me a 100GB external hard drive for my laptop computer so I could back up all my stuff without ending up with a pile of CDs.

This is a very useful gift and I was quick to start using it, but this weekend I thought for a while that I had received it just in time. My laptop became increasingly unreliable, finally becoming almost unusable -- it crashed about every two minutes at that stage.

It sounded, a friend pointed out, like the effects of the Blaster worm. But my anti-virus defences were up to date, and it felt more like a hardware problem. I googled the problem and the suggestions broke down into three possibilities: the Blaster worm, power problems or overheating.

I sought Julie’s advice when she returned from up north and she listened attentively, especially to my comments that I thought there was something loose because the lid no longer closed properly. She went over it and pushed everything back into place that seemed loose or out of place.

So far it seems to be running all right, though I’m being very careful of the plastic casing. I am typing this on it now and everything seems OK. We shall see...

Unhappy to discover that last week’s episode of Theatre of the Mind on community radio was the final show. I knew that there was talk the series was coming to an end, but I hadn’t realised that last week was it.

It’s a shame, because a lot of the old radio shows they covered are available nowhere else. With the American radio programmes you can easily buy MP3 discs or even download them for free from sites like Otrcat or Otrfan. But the comedies and serials from the great old days of Australian radio are heard infrequently if at all.

Television star Dawn Lake died this week and the obituaries discussed her career highlights, mentioning in passing that she once worked with radio superstar Jack Davey. I suspect that a lot of Australians under 50 would have said “Who?”

I read over your blog, and i found it inquisitive, you may find My Blog interesting. My blog is just about my day to day life, as a park ranger. So please Click Here To Read My Blog