Sometimes you get a surprise from life, just when you have everything planned out for the day ahead. 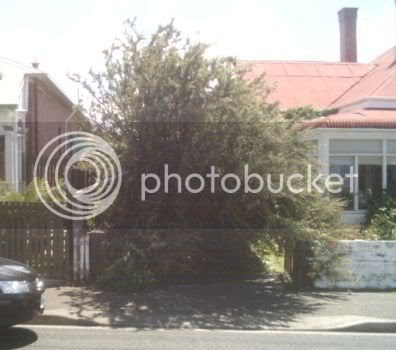 After a few weeks you becomes inured to the constant warnings from the Weather Bureau about strong winds, gales and storms. But now and again you realise that it does affect you.

Tuesday morning I discussed what I was going to do today with my sister, who was going to go down to the final day of the Taste Of Tasmania while I was at work. I walked out to the car and got behind the wheel.

I adjusted the rear view mirror. Must be out of alignment, I thought, I can’t see anything but the trees next to the driveway. Moved the mirror. Still nothing but trees.

Got out of the car and looked down the driveway. The tree at the mouth of the driveway had keeled over in the high winds and completely blocked any exit to the street.

I walked back inside and said to Julie: "Change of plans. Neither of us is going anywhere." 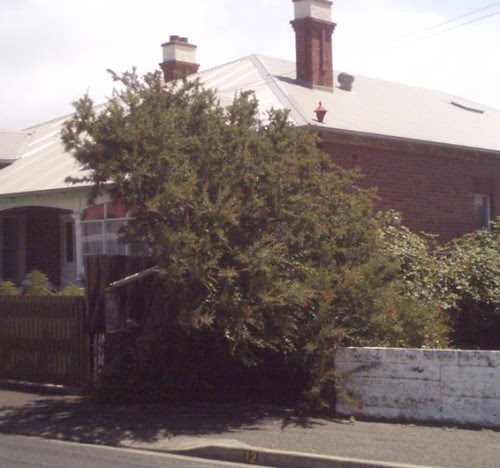 So, while Julie took a cab to her house, I walked down to the nearest bus stop and arrived at the office only 30 minutes late.

Using my mobile phone, I managed to co-ordinate with the Trees R Us company to go out with chainsaws and chop up the tree. They were so busy that they couldn’t cart it away straightaway, but they could clear the driveway.

Quite a sight greeted me when I returned home. The entire left half of the front lawn was covered in foliage. Somehow the tree took up more room horizontally than it ever did vertically.


But that wasn’t the only thing that crashed.


The last few days I’d been having a lot of trouble with my laptop. The machine had been crashing more and more frequently, to the point where I suspected that the problem was with the hardware, not the software. Julie, who’s of a more practical bent than I am, tried adjusting the casing of the machine, attempting to tighten up any loose panels.


Wednesday morning I packed up the machine and drove into the city to visit the Essentially Mobile shop in Collins Street. I had spoken to the guy behind the counter about possibly upgrading the memory of my laptop, so he was aware that it was an older machine, an IBM Thinkpad. But when I mentioned my suspicion that the casing itself was actually broken, he shook his head.

Not worth repairing, was his verdict. What he could do was sell me the equivalent machine, a Thinkpad R50E, for $799.

I thought that over for 24 hours, then went back and said I’d take one. My previous machine was over five years old, which is fairly ancient for anything electronic. I had inherited it from my sister, who had bought it second-hand herself. So I guess it didn’t owe us anything.

(If you want a comparison with previous generations, we have a very old laptop in the household which used to belong to the schoolgirl daughter of one of Julie’s friends. It runs Windows 95 so you can guess its vintage. It’s very clunky and slow, but it still runs. The hard drive has a total capacity of 680 MB. It cost $5,000 new. Just think about that the next time you complain about what it costs to upgrade your computer!)

I had to go to work that day, so I took the laptop with me. Things were too busy for me to do anything with it, but several people in the office were curious about it. "What sort is it? Where did you buy it? How much was it? How much?" I should be on a commission for Essentially Mobile - I may have drummed up quite a bit of business for them.


Thursday evening I was very tired after a busy day. It seemed almost as though this was an omen - perhaps this new year was going to be full of crashes - trees falling and laptops self-destructing. What was going to be next week? My health and finances were a little wobbly and I’d made the occasional mistake at work. Was I on some sort of downward spiral?


Or was I just being unduly pessimistic? I’m nearly always tired in recent months, and after a while it makes me rather glum and moody. I guess that’s only natural.


Lisa Forrest is filling in for Tony Delroy over summer. Tony's back 30th January 2005.


Summer Nightlife with Lisa Forrest is looking for a top ten list of your favourite tracks for Summer. We want a list of songs, the ones that take you straight back to your first holiday at the beach, or the first time you met your true love.
Email Nightlifes Hottest Summer Tracks with your favourites!

NightLife is a diverse mix of news and current affairs, lifestyle and entertainment. Regular features include the incredibly popular Challenge, the laughs from Not the Nightly News and Hollywood Hot Gossip. Money matters, science and technology, spiritual questions, human and family issues are discussed with experts, and listeners are given many opportunities for interaction and talkback.

Nightlife is streamed 10pm - 2am Mon-Fri EAT, in
RealAudio, or Windows media formats