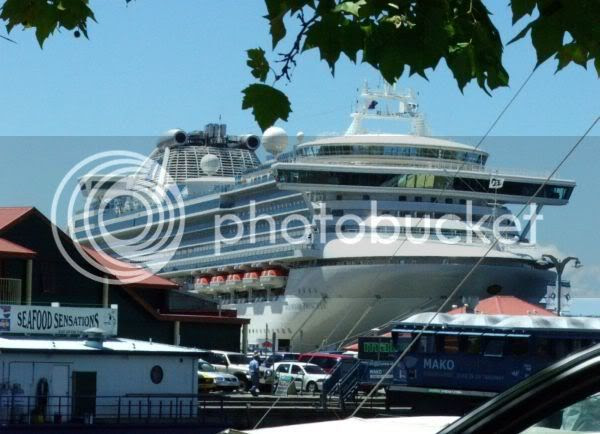 Ocean liners seem to be getting bigger and bigger. The summer months in Tasmania mean a series of cruise liners calling at various ports, and some of them are mind-boggling in their dimensions.

Driving past the waterfront on Thursday, the centre of all eyes had to be the Diamond Princess, the largest liner ever to dock at Hobart. Three times the size of the Titanic, it checks in at 116,000 tonnes, it would be taller than a 60-storey building if you stood it up right.

As we drove past it, we were impressed not only by its sheer bulk but by the strange design features like the turbine-like objects on the roof which made it look like something out of Thunderbirds or Transformers - if it had suddenly taken off, we wouldn't have been completely surprised.

The 2700 passengers had only one day in Hobart; the ship sailed at 6 o'clock that night, but will be back for eight visits during 2006. We may have to get used to seeing it here.

Things have changed a bit since I saw the Oriana on my first visit to Sydney and thought it was a pretty big ship - she only carried 1500 passengers I think, and it wasn't nearly as luxurious as the modern superliners.. This is, of course, not the same liner that sails under that name today. (I think the one I saw was built in 1959).

ABC Radio's Nightlife programme has completed its survey of listeners to pick their top songs for summer.


I know all those except for #3, which was a bit of a surprise since I haven't paid much attention to popular music for the last 25 years. Haven't they written any songs about summer during the 1980s and 1990s?

I visited Essentially Mobile about my new laptop and they say that this model doesn't come with a DVD drive, but for $200 they can get me an external drive that will not only play DVDs but burn them as well. That doesn't sound too bad (I can remember the days when a CD burner was an expensive luxury add-on!).

The price includes the enclosure. The what? It's not in the Oxford Dictionary of Computing 1994 edition but apparently it's a fancy name for the box the drive sits in while you connect it to the laptop's USB port.

Reading an old Doc Savage thriller The Exploding Lake originally published in Doc Savage Magazine September 1946: "This months Doc Savage novel takes you to the mystery land of Patagonia, where nature plays curious tricks and the schemes of evil men conspire to make it a country of dread."

A mushroom shaped cloud spotted in Argentina - could it be related to Nazi war-criminals who escaped from Europe at the end of the war? That would be enough of a plot for most thrillers, but with master pulpmeister Lester Dent at the helm, you can be sure there'll be more than that involved by the end of the story.

In fact the whole business turns out to be a carefully-laid trap for Savage.

These post-war Doc Savage stories are shorter and slightly less extravagant than the heyday of the 1930s, but still remarkable for their pace and inventiveness.

You can read them for free on the Blackmask website.


Monday morning I was so tired after the weekend I didn't get up very early. Unfortunately this meant that when I stepped out the back door for the first time that day it was already a hot and sultry 27º [about 85ºF in the old scale]. It was like being hit in the face with a hot towel.

It was so hot outside the back of the house that before we went out that day we had to move the two chickens that live in the box near the back door. We put a cage out under the trees in the backyard and they sat out in the shade and the fresh air.

The white rooster has become quite tame; my sister Julie can pick him up and he'll sit on her arm like a falcon perching on his master's glove. I must try and get a photograph of this one afternoon when she's moving him.

The clear hot day gave way to a clear night with the full moon lighting up the suburbs like a cosmic floodlight. Julie noticed that the frogs and crickets up by her place were unusually quiet that night – perhaps they find it prudent to keep a low profile when it's so easy for predators to zero in on their position in the moonlight.

ABC radio presenter Barbara Pongratz was muttering about having to struggle out of bed and reach for the hose to save her tomatoes from shrivelling up. (Saw her in the supermarket last week — Hi Barb!)

By Tuesday morning things had clouded over a little and the climate felt much milder. It was less intimidating outside and we didn't feel so overwhelmed. I put on a short sleeve top to help Julie feed her animals before she went to a luncheon at the museum, then changed into a business shirt when I arrived at the office.

Things were fairly busy at the office, with a couple of jobs including typing a long handwritten report for one of the church groups. It was all about a project that had come spectacularly unstuck and words like "oversight" and "responsibility" came up with some regularity. Oh dear.

I gave Kay a lift to the shops while I was out. She hasn't bought any blank videotapes for a couple of weeks but she made up for it today, tottering home under the weight of 30 three-hour tapes. That should last her at least a week. (I suppose I can't cast the first stone; I bought two jars of Vegemite in a sale, making eight jars we have in reserve on the pantry shelf now.)

Drove home and served up tonight's dinner: Scotch Eggs on a bed of spinach with home-grown tomatoes and a slice of Molenberg swiss bread, washed down with a Barossa Valley Semillon.

Wednesday morning I felt better than I have most mornings this month. The last couple of weeks I've been so tired that it's been an effort to get anything done. For example, some people complain there's nothing on breakfast television worth watching: first thing in the morning I am so out of it that I run on automatic pilot for the first hour. (I always eat the same things for breakfast in the same order – it's like a mild form of sleepwalking.) It never crosses my mind to turn on the television; it's all I can do to listen to the wireless.

I have nearly finished personalising my new laptop. I not only had to transfer the data from my old increasingly-unreliable machine, but I had a whole list of software I needed to install.

I covered a sheet of paper with 22 programmes I would like to use on it. In the end I installed most of them, I didn't bother with Foxit Reader because the machine came with Adobe Acrobat 6 already installed. Ad-Aware and Spybot are less necessary since I started using Spyware Blaster – prevention is better than cure. And I prefer the slimmer Real Alternative to the various Real Player versions.

All these are freeware of course, as are the rest of the software: AVG anti-virus, Audacity sound recorder, Wordweb, Fresh Download, Microsoft Reader, YBook, and a neat little collection of Oxford Dictionary reference works I got off a disc many years ago. And I've previously mentioned Rough Draft 3 which I use for word processing.

Just about got it exactly right....