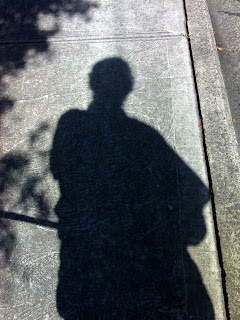 The monthly pub quiz run by the Irish Association was Monday night. Five of us formed a team under the usual name of The Amnesiacs but we failed to triumph this time round. We came second in our category (of course there were only three teams in that section!).

The categories this time were "Who am I?", Australian trivia, movies, music, books, "Yesterday's News" and a table quiz where we had to identify celebrities whose faces had been morphed onto other bodies (surprisingly difficult).

Sometimes you find that even things you thought you knew refuse to come to mind. Quick, what year did Roy Orbison die? [It was 1988.]

And at times the entire audience disagrees with the quizmaster. Only 16 countries in the Commonwealth? We all said 52. But what the question actually wanted to know was how many Commonwealth countries have the Queen as their Head of State. Like Elizabeth, confusion reigned.

We always have a meal while we're waiting for the quiz to start. Usually I have the Caesar salad, but this time on a whim I tried the Venison Sausage Pasta; not bad, but a bit spicy at times.

You'll invariably find me at home on Friday afternoons listening to the Community Radio station to hear Alan Rider's show Theatre Organ Showcase. Always lots of great old tunes played on the Wurlitzer or the Hammond organ. This week's selection was particularly enjoyable.

http://www.mediafire.com/?wxrcm3fzmix
Posted by Mike Hobart at 1:41 am