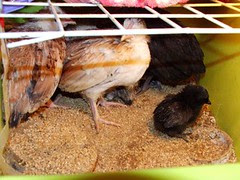 Every few weeks my sister Julie discovers more sick or injured poultry. And they usually wind up in my front hall where she's set up a sort of Intensive Care Ward for Fowl. This week she came across a tiny chick which had been pecked on the back and/or stepped on, leaving it in difficulties. She carried it around for the rest of the afternoon; this caused much comment in the shops and the supermarket, but necessitated re-arranging the plastic crates in the front hall to make room for just-one-more.

A drastic shift in the weather at the beginning of this week saw an unprecedented blast of wet weather lash the state. Sunday night we sat there for an hour or so waiting to see if it was going to ease off before we went to feed Julie's livestock. It didn't.

The guttering over my front door is in worse condition than I had realised. The water poured down onto the front porch as though some mischievous neighbour had turned the hose onto my roof. The old old story -- when the roof is leaking you can't get up to repair it, and when it's not raining you forget the roof needs fixing.

The deluge resulted in 68mm of rain in a single day. "That sounds like a lot," I thought, and reached for the old tape measure. "Bloody hell, that's two and a half inches of rain!"

I stopped in to see Kay on Saturday afternoon to wish her a happy birthday.

While I knocked on the door, I reached over and picked up her mail.

Inside, I watched in disbelief as she opened a birthday card that had been in the post -- the very same card that I had just handed her.

What are the odds on that happening?

The media in Australia has been in a frenzy over the release of a book by Mark Latham, former leader of the ALP. He appeared on the ABC's interview programme Enough Rope, whose host later described him as one of the most emotionally fragile men he'd ever spoken with.

Barry Jones, former ALP president, said that Mr Latham's problem seemed to be that he took everything personally and in 12 months he would probably regret having rushed into print to express his feelings about his colleagues.

As a disinterested bystander it's hard to see Latham as anything but bitter, petulant and vengeful. Maybe there was a reason that the electorate didn't vote for him, some instinctive summing-up of his personality as somebody they didn't feel was ready to represent them as Prime Minister.

Certainly he wasn't ready for the rough-and-tumble of national politics.

Is there anybody that he hasn't alienated?

Zelda, our resident goose, continues to stick close to the nest. She only leaves occasionally for a quick wash, then it's back to her vain quest to hatch those two infertile eggs.

This has been going on for weeks and I have no idea how much longer it will last. Every day I go out and take her a bowl of water and some food.

Meanwhile Julie has been assigned to pay particular attention to her mastiff's teeth. I wouldn't suggest it to everyone, said the Vet, but since you can do anything you like with him you should brush his teeth twice a day.

So that's what it's come down to. My sister is acting as valet to a dog, and I'm serving breakfast in bed to waterfowl.