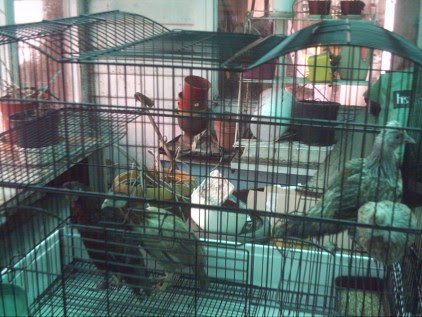 Friday morning we dragged in the cage that Julie bought the day before. It's actually designed for rabbits, but it's roomy enough to take the five pullets that are in one of the plastic crates in my front hall.

Hey, anything that reduces the amount of poultry she's keeping inside the house is a good thing, right? The chickens looked a little startled at finding themselves in a nice new cage outside the back door, but we're hoping they will settle in.

It will be interesting to see if they are noisier or less noisy in their new habitat. The one rooster of these five has only just begun to find his voice; up till a few days ago his tentative crowing sounded more like a gurgle than cock-a-doodle-doo.


Friday night there was another one of those musical smorgasbords at the Polish Club in North Hobart. Hot guitar picking, gypsy jazz and vocal antics were promised. About 60 people turned up to sit and quietly sip their drinks while listening attentively.

The trio Czardas have been round for a few years and have a polished blend of violin, guitar and vocal — though maybe the offbeat ballads in the middle of the bracket of fast-paced string numbers aren't a completely good idea.

I've seen The Fabulous Spondooli Brothers before with their distinctive brand of music and humour. The acoustic guitar duo alternate between high-energy original music and mock-gypsy patter that allows them to indulge in what they call their "mild propensity for nonsense."

I hadn't seen the third group Swing Wizard before; that may have been because it was the first public performance by the quartet. The guitarist from Czardas joined three young musicians for a long bracket of music that ranged from swing to bluegrass.

Someone thanked the audience for being there and providing a forum for the performance of live original music, stuff that doesn't come out of a machine. Amen to that.


"Intuition is reason in a hurry"


I was packing up yet another box of magazines that I haven't worked around to reading. I started musing on the subject of "catching up on your reading".

If I read one short story a day, that would get through 365 a year. Reading two a day would make 730 in a year.

When I was 16 I could have done it. I used to get through four or five novels a week, no problems. Not as good as Arthur C. Clarke of course – in one of his autobiographical pieces he recalls reading ten books a week in his teenage days.

[Bruce Gillespie wrote in one of his fanzines that he stopped buying the science fiction magazines when he worked out that he wouldn't live long enough to read all the books he already had in the house. I won't go that far. I'd like to cut back on some of the stuff that I buy but I don't have the heart to pick out the ones to cull.]

So I started reading tonight. The first story was Ray Bradbury's "Getting Through Sunday Somehow" - it's in his old collection Long After Midnight. In typical Bradbury style he tells the story of a walk through Dublin in the peace of an old-fashioned sabbath, and what came to his mind.

There are 96 days left in the year. If I double up on a couple of days I reckon I could break the hundred.

Listened to a couple of 1940s radio shows on CD from the FGRA. "Death is a Twin" is a pleasant enough locked-room mystery from Mystery Is My Hobby [an Ellery Queen clone], while "Those Who Walk in Darkness" is a piece of grand guignol from Creeps By Night, not great but worth it to hear Peter Lorre introducing Boris Karloff.

Looking at the BBC Radio website it's amazing how much radio drama they still do in Britain. Plays, serials, soaps.... I think in this country we only produce 30 minutes a week on ABC Radio National.