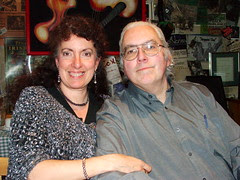 Would you have your photograph taken in exchange for a free meal?

That was the proposal put to us by Helene, a friend of Julie's – a photographer who was working on a photo spread advertising a new outlet of the chain King Buffet.

We turned up at 5 p.m., when the restaurant was almost empty. There were about eight of us but in the photographs that will probably be enough to make the place look packed with diners.

They let us fill our plates with food, but eating wasn't encouraged. We were only allowed to actually put food into our mouths while Helene was changing the settings on her camera. The rest of the time we sat there looking as though we were either just about to eat or had just eaten.

Finally Helene took Guy downstairs to film some shots of him sitting in a wheelchair in the elevator (he doesn't use a wheelchair, but they wanted to show how user-friendly the establishment is). The rest of us were then able to circle the dessert table and eat our sweet course in peace and quiet.

It was an interesting experience but I don't know I'd care for the life of an extra.

Speaking of food, we went into town at the start of the week to attend Dorothy's funeral. As usual, the ladies of the church provided refreshments and I wandered around talking to people in between sandwiches, cakes, scones and other titbits.

"It will be interesting to see your Blood Glucose Level tomorrow," muttered my sister and I winced slightly.

But as it turned out, I needn't have worried. My BGL reading was about 6.2, the best it's been in weeks.

So the solution is obvious - what's missing from my diet is cakes, scones and canapes.

I wonder if I can get a prescription for that?

Yesterday I read Algernon Blackwood's "The Insanity of Jones" which appeared in his collection The Listener and Other Stories in 1907.

They say that a good story is timeless, and Blackwood's short story certainly resonates with the modern reader - though for uncomfortable reasons.

Jones, the protagonist, is an unremarkable clerk whose only unusual feature is his belief that his soul wanders in and out of otherworldly realms. A belief in reincarnation is usually a harmless enough eccentricity; but Jones comes to believe that his employer is the man who wronged him cruelly in a previous life, leading to bloody revenge.

The story is well written, and Blackwood carefully does nothing to suggest whether Jones' belief is true or not. Jones is a man who isn't bothered that his subjective and objective worlds conflict; he follows his heart rather than his brain.

In today's world we see many such men. They are assassins, suicide bombers and such. Blackwood might recognize them as familiar types.

A recent issue of Book & Magazine Collector looked at the famous names of science fiction in Britain. The latest issue features a long letter from SF expert John Clute objecting to the use of the term "sci fi" in the article.

I remember similar complaints being made thirty or forty years ago. In fact, when I was interviewed by Gideon Haigh for one of Rupert Murdoch's newspapers The Australian some years ago I made the observation that people who used the expression "sci fi" usually knew little about the genre.

That didn't make me really popular at my local science fiction bookshop, where a younger generation of fans didn't share my prejudices.

And a note on the death of Don Addams, forever known as the bumbling Agent 86 in the famous comedy Get Smart.

You couldn't even look at a picture of Maxwell Smart without wanting to smile. What better epitath can anyone have?

I love the ABC television show Spicks and Specks and their final scene for this week was one of their most memorable.

Jade McRae was a guest on the programme and over the end credits she sang the novelty song "Funky Gibbon" which her father had written for the old comedy show The Goodies. A memorable moment indeed.

A quiet evening listening to the radio gave the audience a shock on Wednesday night.

Tony Delroy was broadcasting from Perth in Western Australia, and he said we'll be back after the midnight news with our quiz segment The Challenge.

Unfortunately somebody somewhere threw the wrong switch, and after the news we were suddenly and unexpectedly plunged into the late show on the so-called Youth Network Triple-J. They were playing the loudest heavy metal music I've ever heard in my life, with the vocalist's microphone turned up as high as possible to maximise the distortion.

I'm surprised there wasn't an earth tremor as people all over the country jumped out of their chairs, reaching for the volume knob. I suspect the overlap between Tony Delroy's audience and the Triple-J listeners is vanishingly small.

Ten minutes later we returned to normal programming, but it was a ten minute period that few listeners would ever forget.

Come home, Tony -- things like that rarely happen at home base in Sydney.

You have a great blog here, keep up the great work! I'll definitely bookmark you.

Do you wanna check out The Coolest Guy On The Planet's website?

Check it out if you get some time, and I'll be sure to check back here regularly!