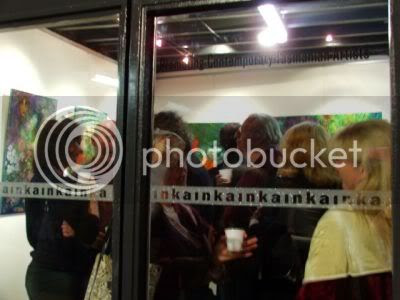 In a city the size of Hobart it's easy to find yourself enmeshed in overlapping networks of friends and acquaintances, as Friday night demonstrated.

We had had an e-mail from artist/singer Georgina Richmond, who we'd first encountered at a concert at the Moonah Arts Centre, to say she was having an exhibition of her paintings at the Inka gallery in Salamanca Place. So Friday night Julie and I made our way down to the docks and past Parliament House to the little gallery just off Salamanca. 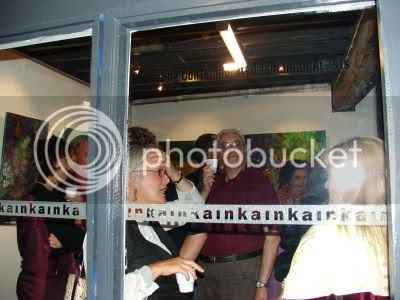 Inka is a small operation, so half a dozen of Georgina's (rather large) oil paintings took up two walls. We arrived right on time, took a plastic cup of cask wine and inspected the pictures. Georgina has a bright colour-filled style - I particularly liked the patterns and textures in the one inspired by the wildflowers on the foothills of Mount Wellington. 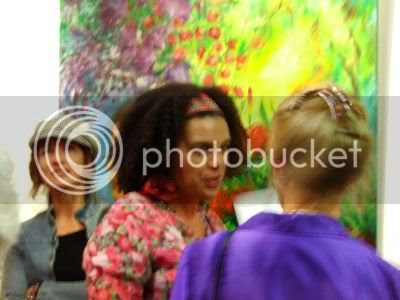 The place started to fill up quickly until it was almost shoulder to shoulder. We found a few familiar faces. Julie ran into a woman she used to work with at the Wrest Point Casino; she hadn't seen her for 18 years. She remembered that she'd been worried about her expecting her first child in Europe at the time of Chernobyl, just to peg it in time and place.

And we spent quite a while talking to Chris Webster, the state's newest magistrate, who was at university with Julie. I was amused to discover that he lives next door to the parents of Julie's old friend Madeleine - we must have been within fifty feet of their home when we were at Madeleine's Australia Day party. 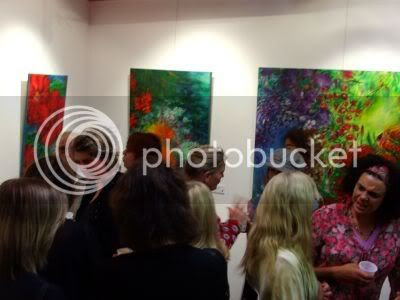 The crowd emptied out as quickly as they'd come. A cynic would suspect they were doing the circuit of openings, since Salamanca Place has always been known for its abundance of arts and crafts venues. 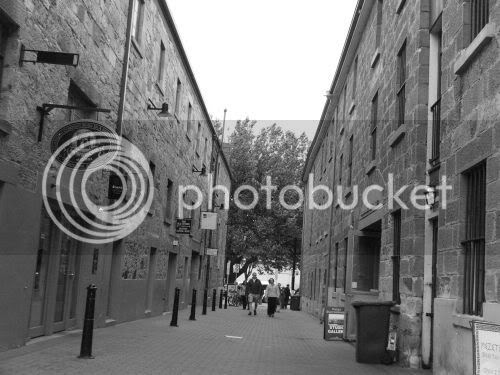 We waved goodbye to Georgina and stepped out into the street for a breath of fresh air before calling at the Greek restaurant around the corner for coffee. 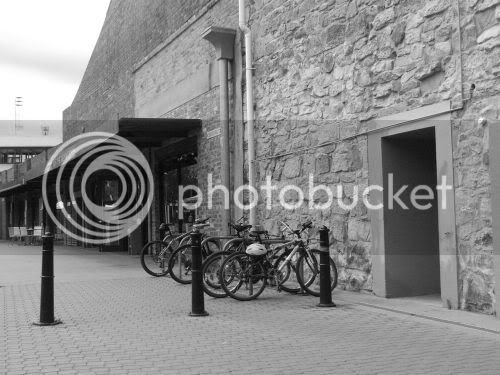 This week seems to mark the kick-off of the cultural year. An arts exhibition today, a play next Wednesday and a concert next Friday. Things are in such a state of activity that if we wished, we could go out to some sort of event every night of the week.

But I don't think I'm up for that. I have to ration my time out or I'll simply exhaust myself.

FROM HIPSTERS TO GONZO

A discussion about the days of Tom Wolfe and New Journalism on the Tony Delroy radio show reinforced my belief that the modern media has become increasingly diffused. The era of the general magazine is almost gone - nearly every popular periodical these days aims at a niche market, whether it be scrapbooking, celebrity cooks or computers.

When I was growing up, there were still weekly magazines like Everybody's, Look, Punch, Australasian Post and Argosy. They aimed at appealing to the interests of the entire population, young or old, male or female, city or country. The paperback revolution and the ubiquity of television gradually ate into their readership and one by one they fell by the wayside.

One eminent British novelist later snarled "Reading? Reading is what people do when there's nothing good on television."

Aside from New Yorker subscribers, few people are willing to sit down and read a 10,000 word feature article. The advent of the Internet has not helped either; we've been conditioned to skim rather than read each word, picking out the gist of an article that has already been edited down to as short a length as possible.

By a strange happenstance, on the same radio show there was a segment about latest gadgetry that included a mention of the so-called E-Reader. This is an electronic device that lets you load the text of novels onto a portable screen, simulating the act of reading a book. It's claimed that this will do for reading what the I-Pod did for music.

Prices are up around US$300 at the moment, but if there's one thing we've noticed about electronics is that the price plunges as soon as they go into mass-production. It will be interesting to see what they're going for in two or three years.

Maybe the book isn't doomed after all, perhaps it's just going to be transformed into a new format, rather in the way that the hardcover book gave way to the paperback.

This concept will probably horrify collectors of first editions and I can sympathise with them, but it's encouraging to think that the simple experience of reading will still be with us in generations to come.

And speaking of the Internet, we're seriously considering moving to Broadband in our household. For the last few years we've been on a dial-up of about 50K; before that, we were on 36K for a couple of years when we first went on-line.

It's not so much that we need the higher speeds (though that would be nice), but it would be very convenient to be able to use the phone while we're using the Internet and especially to have more than one person on-line at the same time rather than taking turns.

Indeed, this might even be advantageous to my health, enabling me to get more rest instead of having to extend my waking hours till my sister finishes bidding for items on e-Bay. Years of night shift have given her the habits of the Night Owl, but that makes it difficult for me sharing a house with her.


By coincidence, Jules Verne's birthday was this month and it came round while I was reading one of his more obscure novels The Purchase of the North Pole, first published in 1889 and also known as Topsy Turvy or Barbicane and Company.

At first this seems like a sort of sequel to Verne's famous From the Earth to the Moon, involving some of the same characters. But it doesn't take long to realise that Verne has his tongue firmly in cheek and the project that Barbicane and his friends are involved with here is outlandishly implausible.

Buying the mineral rights to the polar regions, the protagonists have a plan to tilt the earth's axis to make their property more accessible. The consequences would, of course, make global warming look like a church garden fête and there's widespread panic as the nations of the world begin to understand what is involved.

It's quite fun and there are several references to the ways of the world that are timeless - such as the ignoring of the interests of the Eskimo and other indigenous inhabitants, the squabbling of the nations and the vaguely approving attitude of the Republican party.

The more things change, the more they stay the same.

The facial tumours that are killing a lot of Tasmanian Devils in the wild seem even stranger than first thought.

A previous theory suggested that the tumours could be the after-effect of fights between Devils. Now a team led by Anne-Maree Pearse of the department of primary industry has performed a genetic analysis of tumour cells from 37 animals - and found them to be genetically identical, suggesting they did not arise in the animals own cells.

All the tumour contain cells with 13 "grossly abnormal" chromosomes instead of the usual 14. The cancerous cells seem to be leading a sort of independent existence, the team concludes, probably originating in a single Devil with cancer.

Cancer genomes are usually very unstable but somehow this line is "stable and persistent." The only example of such a disease is one in dogs transmitted during mating.

I've never heard of anything like this before. It was alluded to briefly in one news report I heard on the air, but I haven't seen it in print except in the February 4th New Scientist. Possibly it was just too weird for some of the news media.

CLICK HERE TO SEE MY ARCHIVES
Posted by Mike Hobart at 9:21 pm