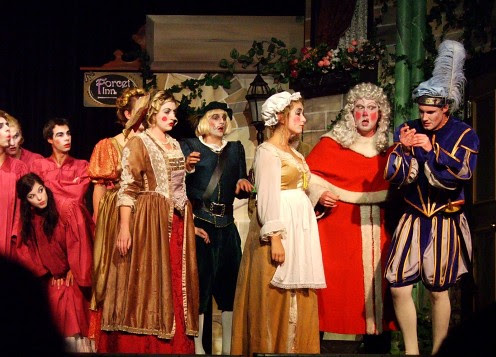 The Venetian Twins is the first production in the 80th birthday year of the Hobart Repertory Theatre Company.

In 1926 a group of leading theatre workers gathered to develop the concept of a Repertory Theatre Company in Hobart, to guarantee a number of 'suitable' productions each year. His Worship The Mayor of Hobart presided over a meeting, held in the Town Hall on the 21st June 1926.and Miss Olive Wilton was chosen to be Repertory's first Producer.

The Hobart Repertory Theatre Society purchased a building and renamed it The Playhouse Theatre. The Society used cash reserves to fund the necessary additions and alterations, costing £5700, and the first production in the "new" theatre was William Shakespeare's Taming of the Shrew directed by Miss Olive Wilton the Founder of the Society.

Since its purchase of the building in 1937, the Hobart Repertory Theatre Society has carried out extensive renovations and improvements to this fine old building. The Playhouse has seen hundreds of fine productions and has been the training ground for many actors, directors and playwrights who have gone on to national and international acclaim. 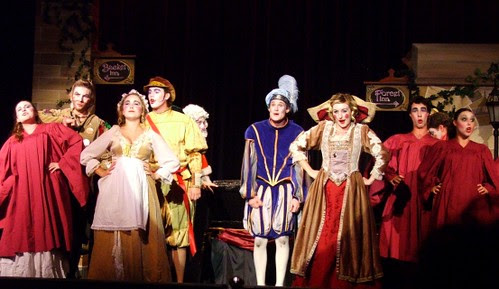 Two hundred years ago, Carlo Goldoni's The Venetian Twins was the first commedia dell'Arte play successfully to be staged with the actors neither wearing masks nor improvising freely around a basic scenario, but following a set script. In 1979 Nick Enright adapted it as a tongue-in-cheek musical which had its first performance at the Sydney Opera House (directed by the usually serious Shakespearian actor John Bell).

The result is as though Bob Hope and Bing Crosby had taken time off from their Road movies to star in Shakespeare's The Comedy of Errors. The lead actor plays the two title characters with just a change of style, and the villain often seems to be channelling the late Kenneth Williams. 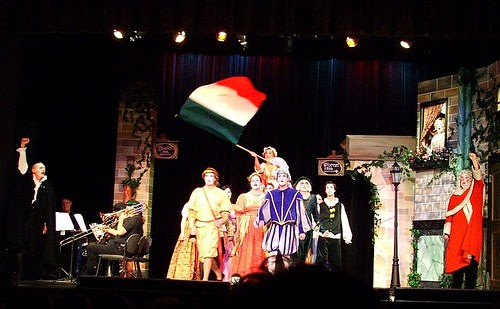 One interstate reviewer summed it up well as Commedia del’arte, slapstick comedy, Aussie strine and vaudeville all collide in this enjoyable, if chaotic, revival of Nick Enright’s 1979 play. Enright’s script itself is an adaptation of Carlo Goldoni’s 18th century comedy "I due gemelli Veneziani", but in typical larrakin style, he’s added plenty of Aussie references and humour into the mix. The result is a colourful, if confusing evening at the theatre.

Listened to Just a Minute on the BBC Radio 4 website

Chairman Nicholas Parsons is an old pro at trying to make sure the panel abstain from deviating, hesitating or repeating themselves (at least for 60 seconds). Paul Merton, Jenny Eclair and Graham Norton join veteran Clement Freud with hilarious results.

Graham Norton in particular was amusing, his frenetic style recalling the heyday of Derek Nimmo.

It's a great show - it's a shame that nobody in Australia under 40 would be familiar with it, since these days ABC airs it at 5:30 in the morning. Its audience in this country is presumably made up mostly of milkmen and nightwatchmen.

Maybe one summer the ABC programming department should think about putting it to air at a time when people are actually awake and listening.

The broadband connection is in hand. I've signed the necessary paperwork and we should have the new modem in a few days.

But the problem this week was of a more human kind. The last couple of months my inbox has been fairly dull and predictable; checking my e-mail has seemed less urgent than it once might have been.

So of course the one day I didn't check it at all there was an unexpected message that I would have wanted to see. Respected theologian/archaeologist/author Dr Clifford Wilson was speaking at a midweek meeting at my church on Wednesday night. Naturally by the time we found out it was on, the meeting was just winding up.

A shame - I remember reading his book Crash Go The Chariots back in the 1970s, a trenchant analysis of the then-fad for Chariots Of The Gods. It would have been interesting to hear his talk.

I nearly had a crash in the car while I was out yesterday. I couldn't get into the car park at Officeworks, so I had to make a big circle around the CBD to get to Corporate Express.

Just as I was heading up Argyle Street, a moth crawled down my face. It must have been in my hair I think. Anyway, it was very distracting, especially when it crawled between my glasses and my face.

Fortunately the car in front of me wasn't any closer, or I might have run into it when I tried to brake and shake my head simultaneously.

Those who've read Eric Frank Russell's novel Wasp will be amused, but it wasn't that funny at the time.

My sister has always been a bit of a night owl, but there are limits even to her endurance.

I went to bed last night while she was backing-up her hard drive to the external drive. It was difficult for me to fall asleep because one of the chickens Julie keeps in the front hall was making a lot of noise. Finally I dozed off.

A couple of hours later, I got up just before dawn to answer a call of nature. I was only slightly surprised to find all the lights still on in the back of the house. Julie was asleep in her chair with the computer purring away smugly next to her.

I tapped her on the shoulder and her eyes shot open. "You probably should lie down for a while before the sun comes up," I said.

She looked a little groggy but nodded in agreement.

First time that's happened for a long time. I remember when we first had a computer there were a couple of times that she was still at the keyboard when I got up the next morning.

But we've all done that at one time or another.

The ABC has picked up The West Wing and is beginning the fourth season this week. It has been running on one of the commercial stations but was notorious as one of those programmes that the network feels it has to move around a lot, causing much angst amongst viewers.

I've never actually seen an episode of it, so while I was in the supermarket I picked up a $10 DVD that has the first four episodes of the first season. I figure that way at least I'll know who most of the characters are and have some idea of what's going on.

Otherwise there would be a temptation to tune out because the learning curve would just be too steep.

There was a television critic in Melbourne once who'd never watched Buffy the Vampire Slayer and figured he'd tune in and look at an episode. Having no inkling of the five years of backstory involved, he couldn't make head or tail of what was going on.

Hey, glad to find you here after the Great Diary-X Crash of 2006! Sad that.