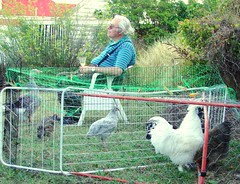 We ended up in the back garden last Friday afternoon, which was a lot hotter than I expected. The weatherman predicted a warm day with a possible thunderstorm later. It was certainly warm and humid enough, but when it clouded over a little we braced ourselves for a storm.

Didn't happen. The storm veered off and the only ones who got hit were the people of Bruny Island, who were subject to an unexpected fall of hailstones.

My sister and I moved out onto the back lawn, where she occupied herself by fitting together some metal fencing she'd bought at a local discount store. This allowed her to put all the poultry out on the lawn together – instead of having them dotted around in various boxes and cages in and around my house.

It was a virtual poultry suburb. 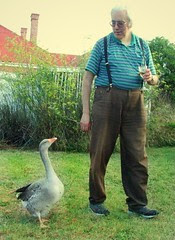 We sat out there with a cold glass of wine while the goose and the cats wandered about at our feet and the chickens pecked around happily on the dry grass. Every so often a cool breeze would pass over and we'd go "Aaaaaah." 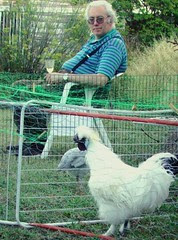 Listened to the radio nostalgia programme Those Were The Days over their website.

This is the second of two special programmes they're doing to celebrate Jack Benny and Mel Blanc. Every February is Jack Benny month apparently

Includes PHIL HARRIS - ALICE FAYE PROGRAM (4-2-50) Phil tells his daughters the story of the Easter Bunny. WHAT’S UP MEL? (2-11-06) “The Man of a Thousand Voices” is the second of four special features by animation historian Curtis L. Katz on Mel Blanc and his Warner Bros. cartoons. JUDY CANOVA SHOW (7-6-43) First show in the series as Judy returns to Rancho Canova after a WW II bond-selling tour in Hollywood. JACK BENNY PROGRAM (9-25-49) As Jack arrives at CBS to do his third show of the new season, he bumps into Edgar Bergen and Charlie McCarthy, Amos ‘n’ Andy and Red Skelton, now all CBS stars whose programs began that week.

Valentine's Day again last week. Which is also my mother's birthday. Not as painful as last year, but I couldn't help experiencing a twinge late at night, that part of the day when the house is quiet and memories come floating across the back of the mind. *Sigh*

You may have seen the coverage of Georgina Richmond's art exhibition on this page yesterday. Unfortunately I missed out on tickets for her concert at Runnymede on Friday.

I spoke to Kookaburra books and they explained the music room at Runnymede only holds 45 people so the tickets sold out quickly. I should have been quicker.

I enjoy John H. Dircx's stories about black homicide detective Cyrus Auburn. The latest story in the series, with the unlikely title "Bubble Brain and the Fat Ladies", appears in the November 2005 issue of Alfred Hitchcock's Mystery Magazine.

Can Auburn establish a link between the local occult bookshop and a body found outside the bowling alley?

The mystery classic in that issue is Edgar Allan Poe's "The Man of the Crowd", which I haven't read for nearly 40 years. Not much of a punchline, but an engrossing tale about a man who abhors solitude.