Wednesday it was such a cold and foggy morning that after I went out to bring in the newspaper before it disappeared I went back to bed for a while. But by the middle of the day it had cleared to such a sunny afternoon that we decided to put the poultry convalescents out in the garden for some fresh air.

The goose watched us put the three chickens out and the two cats followed us out to see what was going on. I think we had everybody except the budgerigar out on the back lawn. 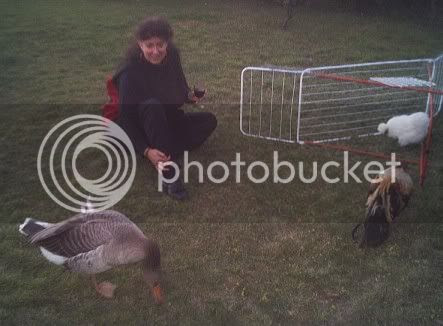 No news from the garage yet about my car.

I don't know what sort of impression I make on people, but I sometimes get an odd reaction from what I think are quite normal comments.

Speaking to one of the mechanics about the problems with my radiator, I said casually "Well, you can't manage without a radiator." There was an alarmed silence and he replied "No -- er, you certainly do need a radiator."

Maybe I'm prejudiced but I think that Collectors is the best of the crop of the new shows in the 6:30 slot on the Australian Broadcasting Corporation. We get to see a lot of the hidden treasures of the Tasmanian Museum, and various collectors are wheeled out to let us appreciate their bizarre hobbies. Always good fun.

Re my recent comment on generic food sourced abroad by supermarket chains -- Woolworths have just brought out their new line of Select canned foods.

Nicely packaged but if you read the fine print those beans came from a field somewhere in Belgium.

I've still been having a few problems listening to the BBC7 website, but I did enjoy the episode of Beyond Our Ken from 1963 in which Kenneth Horne and his team take the mickey out of the then blockbuster Cleopatra.

The last line of the skit sees Cleopatra on her deathbed. "I'm dying... and I've never achieved my life's ambition -- to make a movie about Elizabeth Taylor."

INSPECTOR LYNLEY MYSTERIES: A SUITABLE VENGEANCE (2003) In this week's whodunit telemovie Lynley returns to his ancestral pile with his beloved Helen. However, a brutal murder on the grounds of his idyllic Cornish estate sheds new light on the inspector and his surprisingly dysfunctional family.

This works well enough on screen, but there is always the niggling feeling that the plot of Elizabeth George's novels has had to be simplified for the small screen. Who was it who said once that "Any adaptation is necessarily an abridgement"?

(Lovers of British popular fiction may be reminded of Daphne Du Maurier's Rebecca and Dorothy L. Sayer's Clouds of Witness which also features a titled sleuth whose brother is a murder suspect).

Personally I think that The Last Detective based on a series of novels by Leslie Thomas feels like a more successful adaptation.