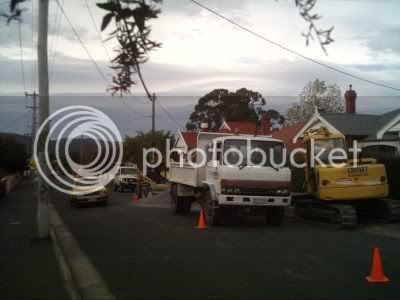 The gas company seems to have finished tearing up the footpaths in my street. I think.

Listening to BBC Radio has been very difficult for me lately. The signal has been coming through garbled most of the time.

What seems to have been the problem is the pesky automatic update from Real Player -- twice I installed Real Player and it worked fine until a window came up saying I needed an update which would now be installed. Then the problem started all over again.

What I've had to do is install instead a replacement called Real Alternative which I downloaded free from one of the software sites Major Geeks. So far it seems to do the same job all right.

The only remaining difficulty is that the signal from the BBC stutters regularly, meaning if you record a 30-minute show (using, say, Audacity) you get little blank spots every one or two minutes. This makes for a long tedious job of editing before you save the recording, but it can be done if you have enough patience.

You wouldn't want to be recording any three-hour specials though.

The goose goes from strength to strength, but we only have two surviving chickens at my house (as opposed to the multitude at my sister's place). One seems fine now but the other still has a crippled leg and Julie has been feeding and tending it solicitiously every day.

Mind you, sometimes even I can make unwarranted assumptions. She arrived home from the health food store the other day with a bag of what looked like bird seed. It was a mixture of crushed linseed, granulated sunflower kernels and almond meal.

"This is the latest thing to try and build your chick up, is it?" I asked and she shook her head. Apparently it's for our own use; we're supposed to sprinkle it over our breakfast cereal and otherwise add it to our food.

Listened to a 1972 interview "The Golden Age of Radio" on Yesterday USA -- I hadn't realised till then that Brett Morrison who starred as The Shadow for many years was also the urbane host Mr First Nighter who presented plays from "the little theatre off Times Square" [actually it was a studio in Chicago, but that's the magic of radio for you!].

Re the above comments, I can listen to this show from America without any trouble because they use Windows Media Player rather than Real Player to stream their programmes. You might hate Bill Gates in principle, but not all his products are loathsome and vile.