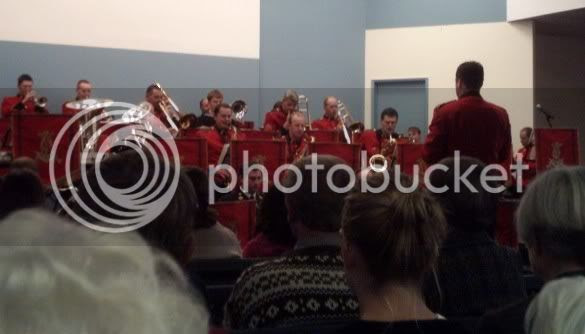 Sunday morning I felt slow and leaden when I crawled out of bed, but I got to church more or less on time.

R1 and R2 had both been away at the state meeting this week, so Sam was preaching. He presented a sermon on evangelism that had some good points; unfortunately I can't be more specific because my notes are in the car, which is in the shop at the moment (radiator trouble).

In the afternoon my sister and I went to one of the other inner-city churches who were hosting a fund-raising concert.

The bandstand was so full of red uniforms you might have thought the RCMP were in town, but in fact it was the Australian Army's Tasmanian Band (with a couple of ring-ins from the Royal Australian Navy). They had a big brassy sound that was particularly well suited to the up-tempo jazz numbers -- I especially liked their Duke Ellington medley.

Vocalist Kaye Payne joined the band to do a couple of high-energy numbers, which were very well received by the audience.

A worthy occasion in many ways -- The show raised $1500 for Lifeline.

I try not to buy too much stuff over the net or by mail-order, but the catalogues from the Folio Society are fascinating reading. I sometimes think I might laminate the catalogues and keep them rather than buy the books they advertise.

Opening this month's special offer, I steeled myself not to be influenced by the Lost Cities of the Ancient World. I can live without that, I told myself, and felt quite smug at my self control.

Then I turned the last page.

Last chance to buy, it said. Half price. The Chronicles of Narnia by C. S. Lewis in seven cloth-bound volumes, blocked in gold, with the original illustrations by Pauline Baynes.

Halve the price, add the postage, divide by seven... that's about $25 per volume. Anybody who's been in a bookstore in the last decade knows 25 bucks doesn't get you much these days, certainly not a volume of this quality.

I can feel my resolve weakening by the hour....

Some action on the chicken front.

Julie brought over one of her roosters who is off-colour so she can keep him under observation. (I joked to someone that we should put up a sign ICU, standing for Intensive Chicken-care Unit.) His name is Turk, short for Turkey because he was one of the biggest roosters in the farmyard.

Meanwhile Julie was surprised on Sunday to discover two fully-grown hens in her farmyard she'd never seen before. There was an empty sack over by the gate, so she deduces that someone wanted to get rid of two chickens, saw her flock and figured that she mightn't even notice a couple extra.

At least it will be good for the gene pool. She hasn't had any new blood among the chooks for some time.

The geese, for example, are probably a bit inbred too. That would account for why two of the younger ones have an identical malformation of the left wing that makes some of the feathers stick out horizontally.

The discovery of an amazing city left behind by the Ancients in the most unlikely of places, leads a new Stargate team to the distant Pegasus galaxy. Once there, the new team encounters a planet of primitive humans being decimated by a terrible alien race - the Wraith.

The Stargate: Atlantis premiere "Rising" comes from seasoned regulars on the original programme [writers Brad Wright and Robert C. Cooper & director Martin Wood] and manages to get through most of the intrinisc problems of pilot episodes. For example, I didn't think a lot of the pilot episodes of Star Trek: the Next Generation or Deep Space Nine.

OK, so it lacks the wit of the original series and we still have to get a handle on some of the characters, but there are some handsomely-mounted sequences and I'll be interested to see how it develops over the next couple of months.