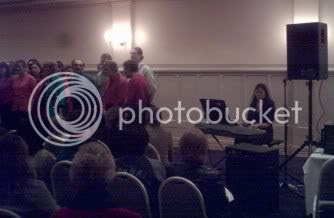 Tuesday night was this month's Music Showcase evening at the Regency Room at Hadley's Hotel. By the time we arrived it was SRO [Standing Room Only] but after a few minutes we managed to find a seat in the third row.

Not even throat surgery could stop the indefatigable Mei from rounding up an unprecedented number of singers and musicians -- there were 20 items on the bill tonight, ranging from nervous soloists to the Hobart Jazz Choir which has 35 members.

There weren't quite as many originals as in previous nights, with many opting to do versions of standards (yes, there was even one Celine Dion wannabe who sang "My Heart Will Go On"). Louise Carr performed her new song "Sometimes" while Dawn Chorus gave us two new songs that Mei had written "He's With Me Everywhere" and "When I Am Gone."

If there was a prize for the oddest choice, it would probably go to Quartet Sans Nom who chose to perform two songs: "God So Love The World" and "Rubber Duckie".

This is a great venue for supporters of live music -- "we must nurture and encourage our musicians in order to keep music live," as Mei says in the programme booklet.

The Music Showcase receives not a dollar in subsidies, grants or funding but admission charge is only a gold coin. A tribute to the dedication of all those involved.

Well, I've got my car back and it didn't cost quite as much as it might have done (they managed to repair the radiator instead of replacing it) but the bill came with a long list of things that will need doing in the near future.

The list is more or less in order of importance, ranging from the brakes at the beginning to new blades for the windscreen wiper way down the list. It's getting older (aren't we all?) so I wasn't that surprised. But I would have liked a little more time to tackle such expensive items.

But at least I'm back on the road. I'd just gotten used to letting my sister chauffeur me around too.

It's sort of like when your watch breaks down. At first you are at a loss, trying to muddle through without it. Then after a while you get used to it and it becomes actually rather restful. ("I don't know what time it is -- but I have no way of working it out, so why worry?")

Listened to another FGRA CD, featuring the 1940s radio show Stand By For Music, which was sort of the equivalent of an infomercial. The 15 minute shows featured top-grade music guests interspersed with pitches for joining the U.S. Navy.

Apart from Nat King Cole, I hadn't heard of any of the guests (the Bell Sisters were apparently still in High School for example) but it made for a pleasant hour's listening.

The third episode of Stargate: Atlantis titled "Thirty Eight Minutes" has won me over. This one has a taut script equal to most of the stories in the original series.

Here we have a space shuttle jammed in the Stargate ring, with 38 minutes before it closes automatically and cuts the ship in half. The story unfolds in real time, with the crew of the shuttle and their colleagues at base frantically trying to devise a way out of the situation.

To complicate things, the shuttle's commander has an alien parasite attached to his neck and his men also have to find a way to detach it without killing him.

An exciting story well told -- what more could we ask for?

But how seldom we get it.